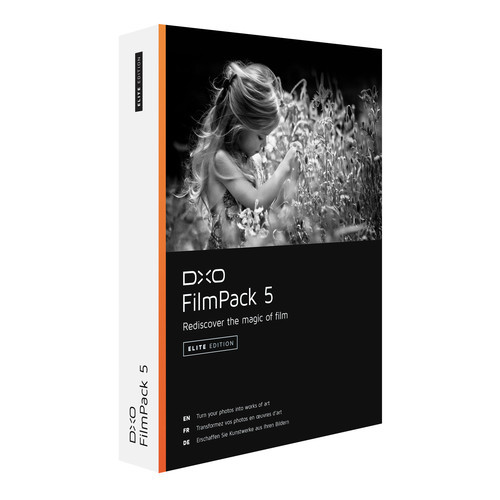 Enabling you to simulate the unique appearance of different film types with your digital files, DxO's FilmPack 5 Elite Edition adds an element of analog photography to your digital workflow. Comprising more than 80 distinct film types, this software includes a variety of favorite black & white, color negative, and color positive films whose unique qualities and grain structures can be applied to digital images. Beyond applying the film profiles themselves, this software is also capable of processing raw image files, compensating for optical defects automatically, and minimizing digital noise in favor of simulated film grain. An array of traditionally-inspired creative effects can also be applied to imagery, including toning, filter effects, light leaks, and vignettes; each of which are fully controllable to create a personalized look. Offering some of the most beloved and distinct aspects of film photography within an efficient digital interface, FilmPack 5 allows you to re-enter the world of analog photography with the convenience and control of a digital workflow.
Set within an intuitive interface, this program neatly organizes all creative effects, film renderings, and editing controls within reach and also incorporates a file browser for easy access to local and networked file folders. FilmPack 5 can function as both a standalone application or as a plug-in with popular editing programs from Adobe, Apple, and DxO.

At the core of FilmPack 5 is a host of dedicated film profiles designed to replicate the unique qualities of more than 80 film types. Using a scientifically rigorous process, each film type has been profiled by shooting calibration targets and real subjects, developed by reputable film development labs, and then scanned at high resolution in order to accurately measure the distinct qualities of each film type in relation to response and grain patterns. Each of the color and black & white films can then be simulated using the software in order to mimic their grain, color, saturation, and contrast with your digital files. Grain intensity and density can be adjusted within each film type and, additionally, different film characteristics can be combined to create your own custom profiles.

Additionally 39 Designer Renderings have been included, to simulate different film-based effects, and there is also the ability to customize your own renderings for personal effects.

Support for raw image files helps to garner the truest results in relation to the different film types available. By utilizing all of the image data from capture, the software can restore colors and efficiently process files, including the ability to reduce image noise and apply authentic film grain effects. Additionally, any optical defects from capture-including distortion, vignetting, and chromatic aberrations-can be automatically corrected, too.

Beyond applying the distinct looks of different film types to your digital files, you can also simulate traditional processing effects to further modify the look of your photographs. Vintage effects and tints can be applied, as well as several filter effects, vignetting, blur vignetting, and a variety of textures, light leaks, and image frames can also be added. Additionally, toning allows you to replicate a common darkroom process to affect the final appearance of an image, and split toning control can be used to independently adjust the look of both highlight and shadow regions.

Particularly beneficial to black & white imagery, control over micro-contrast allows you to add a more dramatic look to imagery by adjusting how details and tones are perceived.
A revised Blur tool offers a dedicated Soft Focus mode to produce an artistic, dreamy image quality that is well-suited to portraiture.
An intuitive interface design presents all of the controls within easy reach, with the ability to apply different effects using a single click.
For more advanced control over the look of effects, different settings, including vibrancy and a channel mixer, can be used to fine-tune an image's appearance.
Benefitting an efficient workflow, snapshots, saving of favorite presets, and a built-in print dialogue are all incorporated within FilmPack.
The program is configured within a 16:9 aspect ratio to offer greater room for working when used on widescreen monitors.
Different renderings, effects, and settings have been grouped together within the menu system for faster access to different tools.
Batch processing allows you to consistently apply effects to groups of imagery.
Different customized renderings can be imported and exported.
Snapshots allow you to record the state of your image during the course of editing for easier side-by-side evaluation and re-applying of different techniques and processes.
An integrated file browser allows you to view and select photographs from within the application.
FilmPack 5 can function as a standalone application or as a plug-in for Adobe Photoshop, Photoshop Elements, Photoshop Lightroom, Apple Aperture, or DxO OpticsPro.

Introduction To The Canon Rebel T4i/650D

Introduction to the Canon Rebel SL1/100D