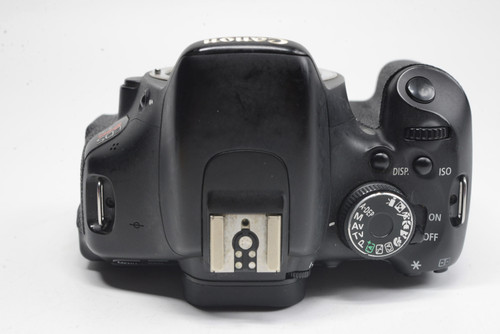 The Canon EOS Rebel T3i DSLR Camera with EF-S 18-55mm IS II Lens Kitprovides you with the T3i body and a Canon EF-S 18-55mm IS II lens. You'll be ready to shoot from day one with this set-up. Just charge the included LP-E8 battery pack and pop in an SD/SDHC/SDXC memory card and you're ready to start making photos! And should you want to expand your selection of lenses for the T3i, all Canon EF and EF-S lenses are compatible.

The Rebel line of DSLR cameras has long been known as a value in photography, focusing on the advanced amateur, student, and all those looking to go beyond what their point-and-shoot lets them do, to stretch and test the limits of their creativity; all while not breaking the bank.

With an 18MP CMOS (APS-C) sensor and Canon's DIGIC 4 Image Processor the T3i captures beautiful, high resloution JPEG, RAW, and RAW+JPEG images to your choice of SD/SDHC/SDXC memory cards. The camera also records full HD .MOV video at 1920 x 1080/30p/24p, among other frame rate options. The wide range of compatible lenses and the camera's dedicated live view give you the flexibility you need to create wonderful HD DSLR movies.

No matter what you're recording - still images or vibrant video - the T3i provides you with a vari-angle 3.0" Clear View LCD monitor that flips-out and is adjustable at a variety of angles for shooting and review of your subject. The camera also features an eye-level viewfinder for more precise composition of shots.

Canon's 63 zone dual-layer sensor works with the 9 point AF system for excellent exposures by minimizing in-camera meter reading error. The system produces more accurate images even in low-lit settings. The T3i also features an in-camera flash or the option to connect a flash, and is Speedlite compatible. Another feature worth mentioning when it comes to exposure include the camera's 100-6400 ISO rating which is expandable up to 12,800. Using this setting along with Canon's Optical Image Stabilizer produces incredible low light shots.

In addition, the T3i features a number of user-friendly modes that allow the user to simplify their experience. Intelligent Auto mode, for example, takes the guesswork out of shooting by automatically setting 5 of the camera's technologies to create the optimum image. Other helpful shooting controls like Basic+ provides the user with 2 options for making creative photos like a pro. The ambience selection adjusts exposure and white balance to give your images a unique look and feel. When shooting by lighting or scene type, Basic+ creates artistic filters for the scene or gives it the feel that the viewer is focused on the center of the image. Of course, other shooting controls like the feature guide and quick control screen help to streamline your experience with the camera as well.

The Rebel on the Move
Photographers looking for an easy-to-use camera that will help them create their next masterpiece need look no further than the Canon EOS Rebel T3i. The next in a long line of phenomenal compact DSLRs, the EOS Rebel T3i continues the Rebel tradition of easy operation, compact design and no-compromise performance. Featuring Canon's newest DIGIC 4 Image Processor and an 18.0 megapixel CMOS image sensor - plus cutting-edge technologies like HD video recording, Live View shooting, Wireless flash photography and even a Vari-angle 3.0" LCD monitor - the EOS Rebel T3i offers the best of EOS photography in a compact package

Amazing Results, No Matter the Light
The EOS Rebel T3i features an expanded ISO range that makes shooting possible in situations previously unthinkable without flash. With an ISO rating up to 6400 (expandable to ISO 12800), along with the DIGIC 4 Image Processor's improved noise-reduction technology, creative possibilities abound. Combine the EOS Rebel T3i with one of Canon's EF or EF-S lenses with Optical Image Stabilizer and the shooting possibilities for both movies and stills expand even further

HD Dreams Come True
The EOS Rebel T3i does not just shoot video clips, it offers the enhanced ease-of-use, image quality, smooth frame rates and adaptive exposure compensation necessary in a professional video-making tool by boasting the most advanced EOS video capturing features to date: When Full HD (1920 x 1080) is set, you can use Movie Digital Zoom to magnify the center of the image by 3-10x while at the same time maintaining gorgeous Canon Full HD image quality. With the Video Snapshot feature, the EOS Rebel T3i DSLR will capture short video clips (of 2, 4 or 8 seconds) then combine them automatically into one video file as a snapshot or highlights "album." With no editing needed after shooting, the compiled video is perfect for sharing online or displaying directly on an HDTV via the camera's HDMI port

In addition to a number of different recording size and frame rate modes, the EOS Rebel T3i enables easy manual control of exposure, focus and Live View features and even allows for in-camera editing. The large CMOS sensor and compatibility with over 60 lenses provide a wealth of depth-of-field options. And it's all as easy as the press of a button - the EOS Rebel T3i has a dedicated Live View/Movie Recording start/stop button that gets the shooting started fast

Low Angles or High, a Big Vari-Angle LCD Captures All the Details
The EOS Rebel T3i features a bright, high resolution, flip-out Vari-angle 3.0" Clear View LCD monitor for shooting at a variety of angles. By simply rotating the monitor, you can hold the camera directly overhead for above-the-crowd shots at concerts, or hold the camera at a low angle for kids and pets. By rotating the LCD monitor fully, the EOS Rebel T3i becomes the ideal camera for self-portraits. The EOS Rebel T3i freely enables easy angle adjustments even if the camera is mounted on a tripod or has a battery grip attach

Make Your Images As You See Them
Basic+ is a new creative imaging feature that makes it easy to create the image effects you want. It can be set with the Quick Control screen in Basic Zone modes. Basic+ provides two options:

Based on the Picture Style and its parameters (sharpness, contrast, saturation, and color tone), the exposure compensation and white balance correction are adjusted to attain the selected ambience. You can also can also select the strength of the ambience effect

Shoot by lighting or scene type

Although the actual parameter set is the white balance, the settings are expressed in more understandable terms

The Multi-Aspect Function of the EOS Rebel T3i lets you express an image in one of three ways by matching the aspect ratio to each scene. In addition to the camera's standard 3:2 ration, the Multi-Aspect Function includes a 1:1 ratio that creates the sensation that the viewer's gaze is focusing upon the center of the image. At the 4:3 ratio, you get nearly the same aspect ratio as a regular TV or a 4:3 computer display. The 16:9 aspect ratio provides a wide look, much the same as HDTV

The EOS Rebel T3i incorporates five in-camera Creative Filters so you can artistically manipulate scenes without the aid of an outside computer. Soft Focus lends a dreamy, romantic aspect, while Grainy Black and White gives a dramatically gritty, hard-bitten look. Miniature Effect creates an illusion in which expansive subjects are seemingly reduced to doll-house-like proportions, and Toy Camera Effect recreates the colors and softness rendered by cameras with a plastic lens, an effect often sought after by art photographers. Fish Eye Effect mimics the "Fisheye" lenses that are favorites of professional photographers for their quirky, convex perspective

Intelligent Scene Analysis for Superb Exposure
The EOS Rebel T3i features a sophisticated, 63 zone Dual-layer sensor designed to complement the 9-point AF system. By taking into account the color and luminosity surrounding chosen AF points, this system delivers an advanced level of accuracy for better results even in difficult lighting situations. Since the metering sensor has a color measurement function, exposure errors and focus errors caused by different light sources are minimized; the EOS Rebel T3i gives stable exposure from shot to shot in situations where light changes, such as in a theater or concert hall. This makes the EOS Rebel T3i ideal for scenes with extreme difference in brightness such as brightly lit scenes or backlit scenes; the camera balances exposure of the main subject at the background, and exposures are not overly influenced by bright areas in the shot. Since the EOS Rebel T3i provides high-speed X-sync ("X-sync" means the fastest shutter speed that can synchronize with a flash burst at the moment the shutter is fully released) up to 1/200 sec., the range of photographic expression is dramatically increased, allowing the EOS Rebel T3i to be used with confidence in bright scenes or dim

Photography Made Truly Easy
The Canon EOS Rebel T3i DSLR demystifies great photography by including an in-camera feature guide. Appearing on the camera's LCD, the feature guide displays a simple description or advice for the respective function. It is displayed in each shooting mode, during mode dial operations, and for quick control screen functions (during normal shooting, Live View shooting, movie shooting, and playback). The feature guide appears automatically during mode dial operations and when a function is selected on the quick control screen

Additionally, the EOS Rebel T3i is compatible with Eye-Fi SD cards, which are outfitted with a Wi-Fi transmitter (IEEE 802.11b/g) and an internal antenna for wireless, high-speed transfer of images. With an Eye-Fi card installed, the EOS Rebel EOS Rebel T3i can display the Eye-Fi's connection status and error notes with ease, for fully functional wireless uploading of images directly from the camera

EF Lenses
The EOS Rebel T3i is compatible with all Canon lenses in the EF lineup, including compact and lightweight EF-S lenses, ranging from ultra-wide angle to super telephoto lenses. Canon lenses employ advanced optical expertise and micron-precision engineering to deliver outstanding performance and deliver beautiful results. Special technologies like the Canon Image Stabilizer technology in select lenses helps to minimize the effect of camera shake, effectively adding up to four stops of light. With a dizzying array of lenses perfect for travel, sports, still life and everything in between, photographers can truly maximize the quality and performance of their EOS Rebel T3i with superlative Canon optics

Flash Photography
With a flash sync speed of 1/200 of a second, the EOS Rebel T3i also features the acclaimed E-TTL II flash metering system. With any of the flashes in the EX Speedlite line, E-TTL II provides reliable flash output whether shooting fill-in flash pictures in sunlight, or using flash in total darkness. With E-TTL II, the exact same 35-zone metering sensor used for measuring ambient light is also used for flash metering - giving even finer metering command of the image area. If you prefer a broader area for flash metering, there's a menu setting to change to "Average" flash metering - where the entire 35-zone area is measured evenly for flash exposure. Additionally, the EOS Rebel T3i has a Speedlite transmitter built-in for convenient, full-featured wireless control of EX-series Speedlite flashes set as slave units

The Canon Speedlite 430EX II is the ideal step-up accessory for powerful flash shooting with the EOS Rebel T3i. It has excellent flash power (maximum guide number of 141 ft./43m at ISO 100), and is the perfect way to get great flash pictures when you can't get right up to the subject. The 430EX II is also great for bounce flash, with its tilting and swiveling flash head. It automatically zooms the flash head to cover lenses ranging from 16mm up to 105mm or longer with the EOS Rebel T3i. Of course, it works with the camera to provide full E-TTL II automatic flash exposure. And the 430EX II has a powerful AF-assist beam, which allows the camera to autofocus even in total darkness on subjects as far as 32 ft. from the camera