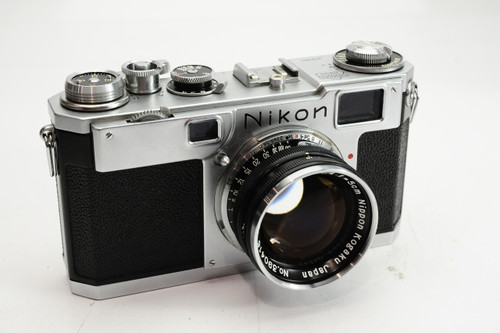 Just six years after their first name branded camera the Nikon 1, Nikon released the 4th variant of their rangefinder camera the smaller, lighter, more functional Nikon S2 in 1954. Picking up production again from 36,746 in the previous model to 56,715 on the S2, Nikon seemed to have finally found their groove. Dropping the [what today we call odd] picture formats of the Nikon 1, M, and S, the Nikon S2 moved to the more common 36 x 24mm picture format, also known as 135mm or more commonly 35mm. Additionally, the fastest shutter speed was doubled from 1/500th of a second to 1/1000th. This was Nikon’s first rangefinder with the delightful 1:1 magnified viewfinder - giving photographers a real-world scale as they looked through the viewfinder, and also could of course shoot with both eyes open. This 1:1 magnification would later be adopted by all their future rangefinder models as well as Canon in 1959 with the Canon P rangefinder, and Cosina in 2004 with the Voigtländer R3 rangefinder.

The Nikon S2 also included a lot of “firsts” such as the option to attach the world’s first battery-powered motor drive. The S2 was also the first Japanese camera with both a film advance lever and a rewind crank. All three of these features enabled resulted in a faster shooting process, that is getting from one shot to the next as quickly as possible. Nikon rangefinders were popular among photojournalists, press, and war photographers and they needed to keep up with the technological developments of other camera makers in the industry. 1954 was also the same year the Leica M3 was released, Leica’s first M mount camera. With easy film loading from the open back of the Leica M3 and its large viewfinder magnification.<