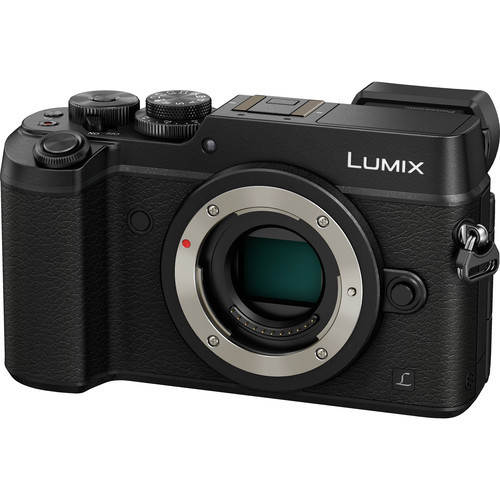 Pairing 4K recording and an updated Micro Four Thirds sensor, the black Panasonic Lumix DMC-GX8 is a sleek, compact mirrorless camera enabling versatile, multimedia recording. Utilizing a high resolution 20.3 MP Digital Live MOS sensor, along with a Venus Engine image processor, the GX8 is able to record 4K UHD movies at 30 or 24 fps, record full-resolution stills at 10 fps with AF-S or 8MP stills at 30 fps, and work in difficult lighting situations with a top sensitivity of ISO 25600. Complementing the imaging capabilities is a unique Dual I.S. system that offers the use of both in-camera and in-lens image stabilization systems to effectively minimize the appearance of camera shake. The body design is also characterized by a durable, magnesium alloy construction that incorporates a tilting 2.36m-dot OLED electronic viewfinder and a free angle 3.0" 1.04m-dot rear OLED touchscreen to suit working from a variety of angles. Offering an enhanced set of imaging features with a comfortable form factor, the GX8 is an everyday camera designed with advanced multimedia capture in mind.

Among other features, the GX8 also features built-in Wi-Fi with NFC to enable seamless wireless image transfer and remote camera control from linked smartphones or tablets. Benefitting both stills and movies, Panasonic's DFD (Depth-From-Defocus) AF system helps to quicken focusing speeds while a Starlight AF feature maintains focusing accuracy in low-light down to -4 EV and manual focus is accented by focus peaking and Touch AF controls.

An updated 20.3MP Digital Live MOS Micro Four Thirds sensor pairs with the Venus Engine image processor to deliver fast overall performance, a wider dynamic range, with notable image quality to suit working in a wide variety of conditions. Sensitivity ranges from ISO 200 to 25600, with the ability to extend down to ISO 100 for working in bright conditions or with longer shutter speeds. Versatile burst shooting modes also allow you to pair high continuous shooting rates with single-shot or continuous autofocus. Using the mechanical focal plane shutter, you can shoot up to 8 fps with AF-S, 6 fps with AF-C, and 5.5 fps during live view with AF-S. For even faster performance, up to 10 fps shooting is possible with the electronic shutter function or 30 fps at 8 MP using the 4K Photo Modes.

Utilizing the 4K video recording capabilities, a trio of still shooting modes are available for recording continuous 8 MP stills at a 30 fps shooting rate:
4K Burst: Just as with video recording, this mode will allow you to continuously record 8 MP images at 30 fps for up to 29 min. 59 sec., making it ideal for instances where you need a fast frame rate in order to capture the best moment.
4K Pre-Burst: This mode is ideal for times when you're unsure of the critical moment to press the shutter button and will record 8 MP images at 30 fps one second prior to and one second after pressing the shutter button in order to give you 60 frames to choose from.
4K Burst (S/S): This mode most closely follows the 4K video recording process, and allows you to playback your video, pause at the chosen moment, and use the shutter button to mark a chosen frame from the video and save it as a single 8 MP frame.

A large OLED Live View Finder features a unique tilting design to benefit working from low angles and also has an impressive 2.36m-dot resolution, 0.77x magnification, and 10,000:1 contrast ratio.
A larger means for image composition and playback, the 3.0" 1.04m-dot rear OLED monitor has a free angle, tilt and swivel design to support viewing from a variety of angles. It is also a touchscreen, which permits intuitive menu navigation and settings control.
Constructed from magnesium alloy with die-cast front and rear frames, the GX8 features a durable design that also incorporates extensive sealing at each joint, dial, and button to render it both splash- and dust-proof.
The sleek flat-body profile incorporates both front and rear dials for intuitive control over aperture and shutter speed settings. Eight assignable function buttons are also available, as well as a dedicated exposure compensation dial.
Built-in Wi-Fi connectivity with NFC allows for wireless image sharing and remote camera control from linked smartphones and tablets.

For accelerated autofocus performance, DFD (Depth-From-Defocus) technology is employed to quickly calculate the distance to subjects and adjust the focusing position in as little as 0.07 seconds, which enables continuous shooting up to 6 fps with continuous AF. This contrast-detection type focus method benefits both still and video recording modes, as well as subject tracking applications where subject color, size, and motion vectors are used to intelligently lock-onto the moving subjects and ensure precise focus. Additionally, supporting working in low-light conditions, a Starlight AF feature enables accurate AF performance down to -4 EV.

Benefitting manual focus operation, focus peaking is available that highlights bright edges of contrast with a colored outline for quickly recognizing your focus point, as well as Touch MF Assist for touch-to-focus operation.