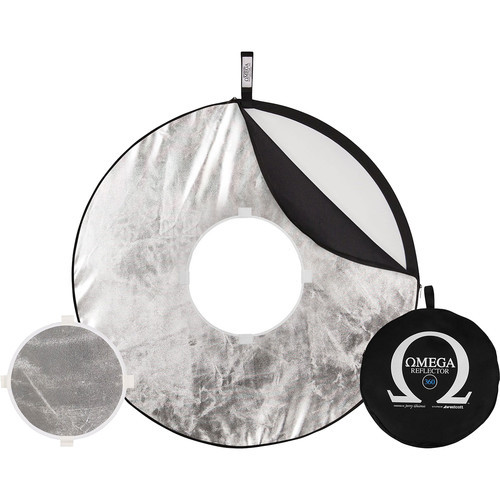 Offering multiple options for creative lighting, the 40" Omega Reflector 360 from Westcott is a 15-in-1 modifier that can add a polished look to your images. At its center is a 1-stop diffuser that can be used to tame noon-day sun or other light sources. A reversible sleeve with silver/white and sunlight/black surfaces slips over the diffusion. Silver offers a cool, specular look with snappy contrast while white provides soft neutral reflective lighting. Sunlight has a late-afternoon warming effect that's flattering to skin tones while black helps block light or create shadows on an overcast day.

As if these great features aren't enough, the Omega 360 hides a secret - the center of the disc is removable via touch-fasteners to leave a circular opening around the size of a person's head, neck and top of the shoulders. You've basically turned the Omega into a large ringlight. Place your subject in front of a bright window and shoot through the reflector. The window light will reflect nearly shadowless light on your subject with distinct circular catchlights in their eyes. Yet another shoot-through method involves hair-lighting the subject from the rear, with the Omega catching some of the light and illuminating the subject's face. The possibilities are almost endless. A carrying case is included with the Omega 360 as well as a suction cup hook to mount it on a window or other glass surface.

The Omega Reflector 360 combines the effects of a traditional reflector with the luxury of a ring flash, offering the ultimate in portrait lighting. This reflector instantly produces a main light and backlight with just a single light source (like the sun or a speedlite). It is a must-have tool for both natural light and flash photographers.

Unlike traditional reflectors, the Omega Reflector 360 features removable center discs. These 13" mini reflectors detach instantly with touch-fasteners to create a shoot-through design, giving you the ability to shoot easily with the reflector out of frame.

Like Westcott's traditional 5-in-1 reflectors, the Omega features a 1-stop diffuser with an interchangeable white, silver, sunlight, and black cover. All of these surfaces are constructed with superior fabrics for pristine illumination and diffusion. These fabrics have been intelligently organized for convenience. Silver and white fabrics, the most commonly used options, for example, are located opposite each other for instant access.

The Omega 360 is designed with a double-riveted frame that allows for effortless mounting and years of use. A suction cup hook is included for mounting to glass surfaces, giving you the ability to easily diffuse sunlight.