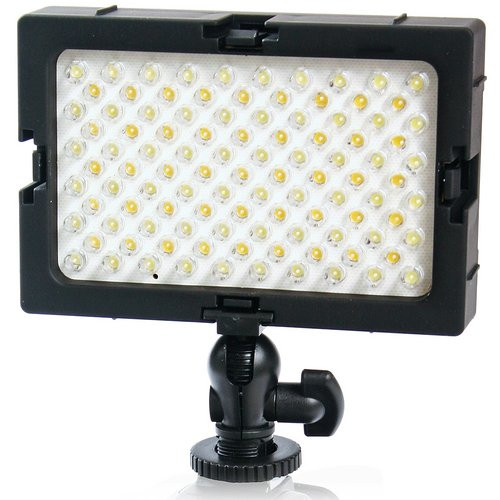 The Dot Line DL-DV105C Video & DSLR LED Light is a portable light that produces an effective clean, white light.  The DL-DV105C is also versatile as an on-camera light attaching to your camera's hot shoe. The color temperature can be set at multiple levels between 3000K and 6000K. This light features a ball head with a 90° tilt slot which provides you the ability to adjust the light according to your needs. The variable light output can be adjusted to full, 3/4, 1/2, or 1/4 power for the right amount of fill light. Each side of the light has cold shoes allowing multiple units to be attached to create an expanded and brighter panel. In addition, the 105 LED light has both a rechargeable lithium ion battery and an adapter that accepts 4x AA batteries (batteries not included). The battery lasts approximately 1.5 before needing to be recharged. Lamp Type 110 LEDs Mount Type Ball head shoe mount Power Source Included Li-ion battery4x AA batteries (not included) via included adapter Battery Life Approx. 90 minutes Battery StyleNP-F550/NP-F570 Battery Capacity2300 mAh