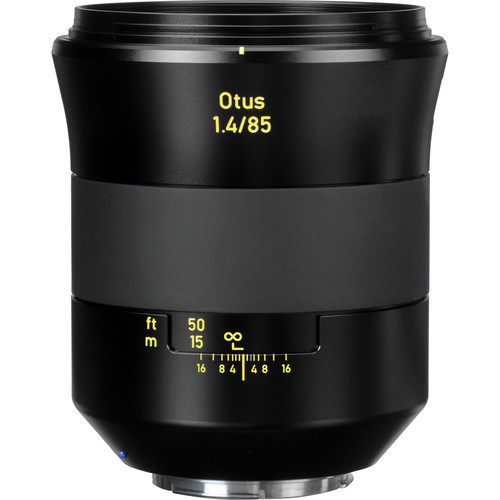 A portrait-length lens with no optical compromises, the Canon EF-mount Zeiss Otus 85mm f/1.4 Apo Planar T* ZE Lens resembles its namesake and seeks to deliver notable performance in any situation. Based on the Planar design, this apochromat incorporates one aspherical element and six elements made from anomalous partial dispersion glass in order to effectively suppress chromatic and spherical aberrations throughout the focus and aperture ranges. Additionally, a floating element design is also employed and a Zeiss T* anti-reflective coating has been applied to individual lens elements for consistent sharpness and image clarity. As a high-precision tool, the Otus 85mm f/1.4 also features a refined physical construction to endure use in trying conditions.

The longer-than-normal focal length pairs well with the fast f/1.4 maximum aperture to enable precise control over focus position for shallow depth of field applications. Accentuating the range of control, this manual focus lens is complemented by haptic design elements, including a long rotational focus throw, rubberized focus ring, and an all-metal lens barrel with high-visibility yellow scale markings. This ZE-series lens is dedicated to Canon EF-mount cameras, and features an electronic interface to support camera-based adjustment over exposure settings.

Prime portrait-length lens is designed for Canon EF-mount full-frame-format DSLRs and 35mm film cameras. It is also compatible with APS-C format DSLRs, where it will provide a 35mm-equivalent focal length of 136mm.

One aspherical element and six elements made from anomalous partial dispersion glass help to suppress chromatic aberrations for greater clarity and color accuracy around subject edges, regardless of the aperture setting in use.

Based on the Planar optical concept, this apochromatic lens virtually eliminates both chromatic and spherical aberrations in order to reduce color fringing and color artifacts in front of and behind the plane of focus.

A floating element design places variable air gaps between select lens groups to realize consistent performance throughout the focusing range, from 2.6' to infinity.

Zeiss T* anti-reflective coatings have been applied to each lens surface to help minimize reflections in order to provide greater image clarity, contrast and color fidelity.

An internal focusing mechanism maintains the overall lens length and, benefitting the use of circular polarizers and graduated neutral density filters, the front filter thread does not rotate during use.

The sophisticated optical system is housed within an all-metal lens barrel, which is built with the narrowest of design tolerances for refined precision and durability.