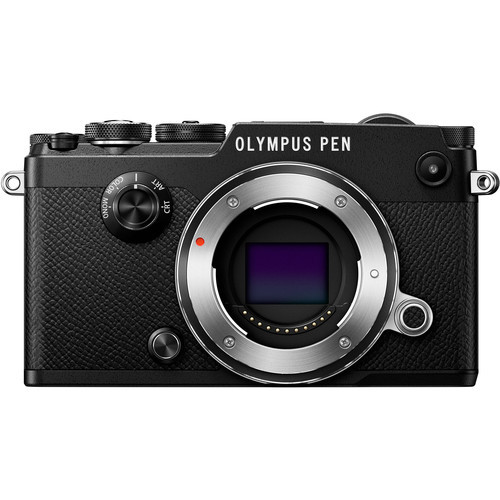 Recalling the beloved profile and form factor of the original Pen film cameras, the black Olympus PEN-F is a sleek, versatile mirrorless Micro Four Thirds camera that combines high-resolution imaging capabilities with advanced creative control. Revolving around a 20.3MP Live MOS sensor and TruePic VII processor, the PEN-F offers nuanced image quality with reduce noise, along with the ability to shoot at up to 10 fps with a mechanical shutter, record Full HD 1080p video, and a sensitivity range up to ISO 25600. In-camera sensor-shift-type 5-axis image stabilization helps to minimize the appearance of camera shake for sharper handheld shooting and the sensor and processor combination also avails a fast 81-area contrast-detection AF system for refined accuracy when working with a variety of subjects. Adjustment over the look and feel of imagery is encouraged by the dedicated Creative Control dial on the front of the camera, which offers direct access to black & white and color profiling, and a dedicated lever permits fine-tuning of exposure and contrast curves while shooting. Complementing these imaging assets, the camera body is physically characterized by its retro-styled design that incorporates a 2.36m-dot OLED electronic viewfinder and articulating 3.0" 1.037m-dot touchscreen LCD for intuitive control and handling. Classic in appearance yet technologically-inclined, the PEN-F marries a natural handling scheme with contemporary, multimedia recording abilities.

Making use of the redeveloped 20.3MP Live MOS sensor and sensor-shift image stabilization, the PEN-F also sees the inclusion of a High Res Shot mode that composites eight images into a single frame to effectively produce a 50MP image. An electronic shutter function can be used for completely silent performance, and also provides fast shutter speed times up to 1/16,000 sec. for working in bright conditions with wide aperture settings. An intervalometer function can be used to produce time-lapse movies, which can be exported at 4K UHD resolution, for recording up to 999 consecutive frames with up to 24-hour intervals. Additionally, built-in Wi-Fi is also available for wirelessly transferring imagery to or remotely controlling the camera from a linked smartphone or tablet.

The sensor and processor combination avails quick performance throughout the camera system, too, including the ability to continuously shoot at up to 10 fps using the mechanical shutter for up to 39 12-bit raw files or 45 JPEGs in a burst. Infinite JPEGs can be recorded in a burst when shooting at 5 fps, or up to 250 raw files. And if working with the electronic shutter function, up to 20 fps shooting speeds are possible, along with a top shutter speed of 1/16,000 sec. In regard to video recording, Full HD 1080p is supported at up to 60 fps, as well as ALL-I and IPB shooting at 30 fps with a 77 Mbps bit-rate. In-camera time-lapse shooting is also possible, with the ability to export finished productions as 4K 3840 x 2160 movies at 5 fps.

In-body, sensor-shift image stabilization helps to minimize the appearance of camera shake by up to 5 stops with any lens in use and compensates for camera movements that become especially noticeable when working with telephoto shots, macro imagery, and long exposures. Furthermore, this unique image stabilization system works across five axes to compensate for vertical angle rotation, horizontal angle rotation, horizontal shift, vertical shift, and rolling camera shake movement. This range of detected movements serves to benefit traditional still image shooting as well as movie recording and working with moving subjects more effectively. Additionally, image stabilization can also be used when framing shots, for more accurate compositions, by half-pressing the shutter button.