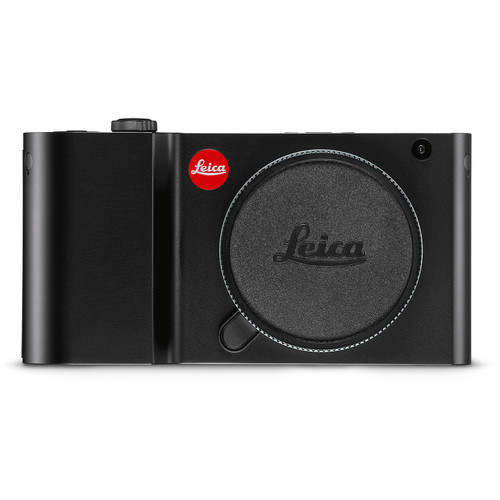 Characterized by its distinctly minimalist design, the black TL Mirrorless Digital Camera from Leica blends both form and function for recording high-resolution stills and Full HD 1080p video. In terms of imaging, the TL sports an APS-C format 16.3MP CMOS sensor, which affords a sensitivity range of ISO 100-12500, as well as a continuous shooting rate of 5 fps for working with moving subjects. The sensor's design also enables a quick contrast-detection autofocus system, which can be used in conjunction with automatic face detection as well as touch AF for fine-tuned control.

Balancing the imaging capabilities is a refined camera body design built from a single block of aluminum alloy. This unibody incorporates just four physical controls for a seamless aesthetic, which relies on the large 3.7" 1.3m-dot touchscreen LCD for the bulk of menu navigation and operational control. The high-resolution screen affords a clear view for composing or reviewing imagery, and the MyCamera menu lets you customize the settings layout to suit your own shooting workflow. Built-in Wi-Fi furthers the intuitiveness in working with the TL, and works in conjunction with the TL-App, for iOS and Android devices, for remotely controlling the camera as well as wirelessly sharing imagery for posting online. In regard to saving photos and movies, an SD memory card slot is available alongside 32GB of internal memory to ensure you're always capable of shooting and saving images.

The 16.3-megapixel APS-C CMOS image sensor is used for creating high resolution detailed images within an ISO range of 100-12500 for use in a wide variety of lighting situations. This sensor uses this information to deliver raw DNG image files with dimensions of 4944 x 3278 pixels as well as record JPEG images for convenience. Additionally, the sensor allows for the recording of high definition video at 1920 x 1080p or 1280 x 720p resolution at 30 frames per second.

Autofocusing is done on-sensor due to a mirrorless design through a contrast-based method, which affords quick and precise focusing performance as well as the use of automatic face detection and touch AF control.

Integrated IEEE 802.11b/g/n Wi-Fi allows you to wirelessly connect iOS and Android devices to the TL for sharing photos and movies to smartphones or tablets for posting online. The free Leica TL-App facilitates sharing imagery between the camera and device, and the app also enables a remote function for wirelessly adjusting the camera's shutter speed, aperture, and for releasing the shutter. The app can also be used as a remote electronic viewfinder to benefit composing self-portraits or group shots, or when working from difficult shooting angles.

Adapter For R Lenses To 4/3 Camera