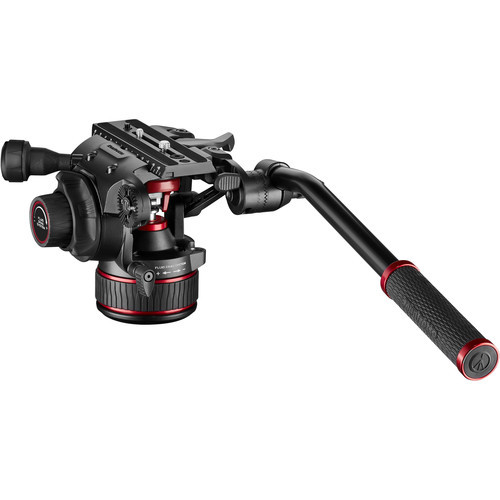 The Manfrotto 608 Nitrotech is a flat base fluid video head designed for the versatility needs of the independent content creator who's engaged in different types of projects. Thanks to its flat base with a 3/8"-16 mounting thread, as well as its relatively compact and lightweight design, the head can easily be moved between a compatible tripod and a slider, jib, monopod, and various other gear. One of the key features of the 608 Nitrotech is its Nitrogen gas piston counterbalance mechanism (hence, Nitrotech), which allows continuous counterbalance adjustment—as opposed to stepped or fixed—for the head's full payload range of 0 - 17.6 lb. Additionally, an upgraded fluid technology significantly improves continuously variable drag performance and enables smooth and judder-free pan and tilt movements.

The 608 Nitrotech offers two rosette mounts for attaching the included pan bar on either the left or right side. These rosettes also feature Manfrotto's Easy Link system for mounting accessories via an articulating arm. Each rosette has a 3/8"-16 port in the center and both Manfrotto and ARRI anti-rotation slots surrounding the mounting port. The Easy Link system is designed to support Manfrotto articulating arms equipped with anti-rotation pins or those with ARRI locating pins in order to prevent twisting. At the same time, standard articulating arms can also be attached.

Other features of the 608 Nitrotech include improved resistance to lower operating temperatures in comparison to previous Nitrotech models and improved ergonomics and materials used for the different knobs.

Flat base with 3/8"-16 mounting thread allowing for use on tripods, sliders, jibs, monopods, and other support gear