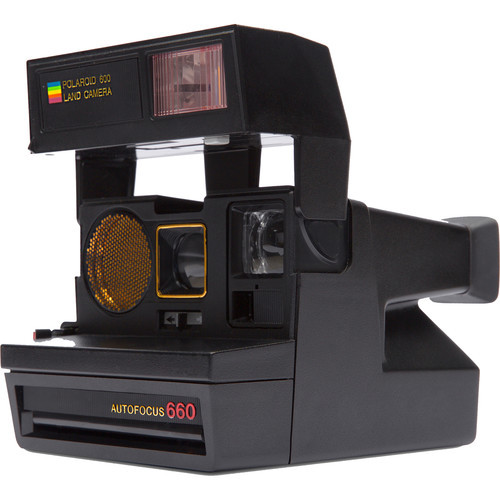 Designed for the beginner, instant camera user, or vintage camera connoisseur, the Polaroid 600 Sun 660 AF Instant Camera has been refurbished by Impossible. The Polaroid Sun 660 AF accepts 600-type instant film that is made for both Polaroid cameras and the Impossible Instant Lab. It has a single-element 116mm lens, capable of focusing as close as 3' away, yet is sharpest between 4-5'. The shutter speed spans a range between 1/4-1/200th second with a wide aperture range of f/11-f/42 to ensure capturing the image you want in a variety of lighting situations. This refurbished model is fitted with a new Frog Tongue from Impossible, which ensures consistent and accurate developing after each shot by shielding the film from light when it is expelled from the camera.

Each pack of instant film contains a built-in, single use battery to power both the camera and flash. Polaroid's original built-in Thyristor flash system was designed to be used indoors and outdoors. This system allows for smart energy use and quick recharge times at less than a second. The flash will automatically recharge when you load film into the camera, press the shutter halfway down, take a picture, or open the camera.