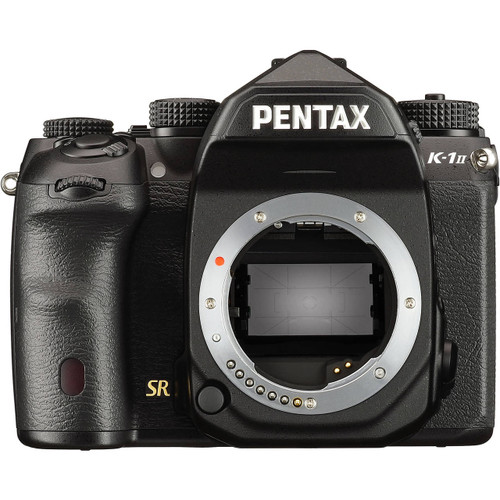 Distinguished by enhanced processing and improved imaging capabilities, the K-1 Mark II from Pentax is the follow-up to their first full-frame flagship DSLR. Revolving around a 36.4MP CMOS sensor and PRIME IV image processor, the camera is capable of producing high-resolution stills at up to 4.4 fps along with recording Full HD video. The 14-bit image processor has been updated with a Ricoh-developed Accelerator Unit, which helps to reduce noise and increase clarity and color accuracy, as well as boost the sensitivity range up to ISO 819200 for working in low-light conditions. Also contributing to improved image quality is the 5-axis Shake Reduction system, which minimizes the appearance of camera shake for sharper handheld shooting. This image stabilization system also enables Pixel Shift Resolution II, which leverages the movement of the sensor to record for sequential frames and merge them together in order to acquire greater color detail and resolution. Dynamic Pixel Shift Resolution also benefits from this technology, however lets you achieve similar results even when working handheld.

In addition to its distinct imaging assets, the K-1 Mark II is also characterized by its unique physical design. A stainless steel and magnesium-alloy body is especially robust and extensive weather-sealing makes this camera suitable for use in harsh climates and cold weather. The large pentaprism optical viewfinder affords 100% frame coverage and a high 0.7x magnification, and the rear 3.2" 1.04m-dot LCD sports a unique Cross-Tilt design for easy positioning to work at a variety of angles. Additionally, built-in Wi-Fi is available for wireless remote control and image transfer and built-in GPS permits geotagging your imagery for tracking your shots on an interactive map.

The K-1 Mark II delivers high-quality imagery using an advanced 36.4MP CMOS sensor that is designed to create detailed images with minimal noise. Guaranteeing maximum resolution, the sensor lacks an anti-aliasing, or optical low-pass, filter though this will cause a higher chance of aliasing and moire. For situations at risk of these artifacts users can leverage an AA Filter Simulator function, which slightly moves the sensor in order to mimic the effects of a physical filter.

Working in concert with the image sensor is an updated 14-bit PRIME IV processing engine, which makes use of a Ricoh-developed Accelerator Unit to effectively suppress noise and reproduce fine details with high accuracy, even with high sensitivity values. This image processor and Accelerator Unit also contribute to a notable boost in sensitivity, with a top setting of ISO 819200 available, along with quick 4.4 fps continuous shooting, Full HD 1080p video recording, and a variety of other processing-intensive tasks, such as Pixel Shift Resolution and AstroTracer.

A staple of Pentax DSLRs, the K-1 Mark II is equipped with a 5-axis Shake Reduction system that can counter the effects of camera shake by up to 5 stops. This system has been optimized for the full-frame sensor and can account for yaw, pitch, and roll as well as vertical and horizontal motion of the camera. Also, due to the stabilization being incorporated into the camera body, it functions with every K-mount lens.

Pentax takes advantage of the sensor's available movement in order to develop additional features, such as the updated Pixel Shift Resolution II setting. This mode shifts the sensor in order to capture full color data on each pixel by compositing four shots. This grants exceptional clarity, lowers noise, and boosts the effective resolution to 42MP. Additionally, the K-1 Mark II also has Dynamic Pixel Shift Resolution, which allows this function to be used even when shooting handheld.

Another capability is an Image Composition Assist function, which allows you to shift the sensor up/down and left/right as well as slightly rotate it. This lets users easily adjust their composition without needing to move their camera and can be useful for delicately balanced tripod work.

The SAFOX 12 AF system is optimized for the full-frame image sensor and has a total of 33 AF points, of which 25 are cross-type, and three f/2.8 luminance sensors to maximize performance in all lighting conditions. The system can operate down to -3 EV using the 25 center sensors and will benefit working in dark scenes as well as extreme back-lit conditions.

In addition to standard stills capture, the K-1 Mark II is capable of Full HD video at up to 30p or 60i using H.264 compression. This enables photographers to add high-resolution motion capture to their arsenal without needing to carry another camera. Also, when shooting in HD 720p, users can shoot at up to 60p. Additionally, the camera is NTSC/PAL switchable and it is equipped with headphone and microphone jacks for high-quality audio support.

Durability has always been one of Pentax's strong suits, and the K-1 Mark II is no exception with a stainless-steel chassis covered in a magnesium-alloy shell that is tough and lightweight. Also, the camera is sealed in 87 places to ensure no rain or dust will take your camera out of commission. The camera is designed to handle freezing temperatures as well, with a rating down to 14°F.

The K-1 Mark II is equipped with two SDXC card slots. These can be configured for backup, splitting storage of JPEGs and raw files, or overflow when card 1 is filled. Also on the body users will find a variety of dials and buttons that will allow for quick and intuitive adjustment of settings. Along with this there are LED-illuminated body points on the lens mount, card slots, the backside of the LCD, and at the cable switch terminal that will help you operate the camera in low light.

One unique feature of the K-1 Mark II's design is the use of a 3.2" 1.04m-dot Cross-Tilt LCD. This ensures the screen remains aligned with the optical center of the camera while allowing for tilt 44° down and 90° upward as well as 35° left and right. The camera also has settings for quickly adjusting the brightness of the display to account for a variety of shooting environments.

With built-in GPS, shooters can automatically track their movement and position as they work with data automatically written to the image file. It can record location, facing direction, and Coordinated Universal Time while also enabling using a digital compass feature. Along with this, it can work with the Shake Reduction mechanism to activate the AstroTracer function. This system obtains location data and camera position to calculate movement of stars in the sky. The sensor is then synced with the movement in order to minimize the capture of star trails with long exposures.