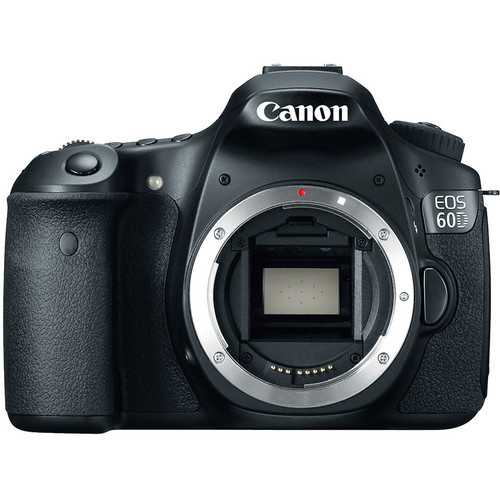 Digital Inspiration. That's how the good folks at Canon define their EOS 60D DSLR Camera. With an 18MP APS-C CMOS sensor, a 3" Clear View LCD, and HD video capture, among other mouth-watering features, perhaps you will agree. Let's take a tantalizing tour of this highly-anticipated DSLR camera body.

What was that? Did I say video? Yes, I did. Let's take a moment to delve into the feature that has all those techies out there jumping out of their desk chairs. The 60D is more than your run-of-the-mill DSLR camera, as we know; it doubles as a 1920 x 1080 HD video camera. With the built-in video camera you'll be able to capture MOV video clips up to 4GB in size (time depends on resolution).

With features like manual exposure control, the option to attach on any of the Canon EF or EF-S lenses, and various audio adjustments - including an external stereo mic connection, and bothmanual and auto gain control - the 60D puts DSLR film-making at your fingertips. Other noteworthy features of the video function include in-camera editing, a number of recording resolutions to choose from, and an HDMI output for one-cable connection to your HDTV.

Perhaps you should take a moment and catch your breath. Ok, here we go - back to the DSLR proper.

Let's ease back into things here. No matter if you're shooting video or digital stills the 60D captures everything to convenient flash memory cards - Record to SD/SDHC/SDXC memory cards. Canon also gives you the option to use wireless USB 2.0 drives, or Eye-Fi cards for computer-free wireless transfer of your images.

Now, back to the show... The 18MP APS-C CMOS sensor packs in enough pixel-power to make those mural prints you've only been dreaming of, a reality. But even if you don't plan on making a wall-sized mural of your dog romping through the surf, 18MP have other advantages. Sharpness, clear details, a lack of image-destroying noise, and true-to-life colors are all examples of how more pixels will make your images pop!

Another high-point of the 60D is the fully articulated (in layman's terms: flip out and/or swivel) 3" LCD screen. That's right boys and girls, the LCD opens away from the camera and articulates for viewing from multiple angles. You can also choose to leave the LCD in the traditional back of the camera position. When you're done shooting, turn the LCD in, and its back cover protects the display from damage.

When it comes to low light you want the option to shoot without a flash. Canon gave the 60D ISO settings from 100-6400 - and the option to go up to 12800 using the custom function. You have more options to choose from - and more opportunity to capture stunningly clear images, even in low light.

What else could Canon fit into this divinely, oh wait, I mean digitally inspired camera? A short overview; includes 5.3 frames per second continuous shooting, a 96% coverage viewfinder, a multi-control dial, a 63-zone dual-layer metering system, and a 9-point AF system.

In addition to these user-friendly features, the camera also boasts in-camera photo editing technologies. You'll be able to process RAW files entirely in the camera to produce a separate JPEG file - without a computer. Filters like "Grainy Black-and-White" and "Soft Focus Effect" also allow you to add an artistic touch to your images, sans post-production. Throw in compatibility with Mac and PC, along with a myriad of bundled software options, and the 60D is one camera that packs a powerful punch.

18MP CMOS Sensor and DIGIC 4 Imaging Processor
The EOS 60D features a Canon-designed 18MP APS-C size CMOS sensor that captures such a high level of resolution; it's easy to crop images for enlargement without concern of losing detail. A major factor in reducing noise, the CMOS sensor assures that images shot at highest sensitivity will be remarkably smooth

Vari-Angle 3" Clear View LCD Monitor
The EOS 60D features a bright, high resolution, flip-out Vari-angle 3.0-inch Clear View LCD monitor for shooting at a variety of angles. By easily switching between low and high angles, the EOS 60D freely enables angle adjustments even if the camera is mounted on a tripod or has a battery grip attached

EOS HD Video
The EOS 60D features HD Video capture technologies - manual exposure control for more creative control, for example - borrowed directly from professional Canon DSLRs to capture stellar video with all the benefits of shooting with a DSLR. By shooting video with the EOS 60D, photographers as well as filmmakers can take advantage of the creative features native to DSLR cameras. Along with its manual controls, the EOS 60D allows for full use of Canon EF and EF-S lenses, including macro and fisheye, providing a plethora of shooting options once reserved only for still photography. The resulting HD video is a standout in its beautiful depth-of-field characteristics and remarkable capture capability under poor lighting conditions. Additionally, a Movie Crop function is included: An SD-quality video (640 x 480) can be cropped to the equivalent of about 7x magnification of regular shooting

The audio input level feature offers bothmanual and auto gain control, up to 64 levels, and a wind filter minimizes unwanted background noise. By pressing the Quick Control button, a simple graphic user interface for adjusting image quality, white balance, image creation and other settings appears on the LCD. The EOS 60D even lets users edit video in-camera: On-site or off, unnecessary scenes can be deleted and the start/end points of video footage can be designated via in-camera editing functions without the need of a separate computer

High ISO Sensitivity
With a broad range of ISO settings, expandable up to 6400 in the auto setting and 12800 with the custom function, the EOS 60D enables shooting from sunrise to sunset and helps ensure capture of the finest detail. With enhanced high-sensitivity optimization, subjects can be captured clearly and easily at high shutter speeds without flash, with minimized blur and noise. In bright scenes, especially long exposures in daylight, optimal exposure can be achieved with a fully open wide-diameter lens, no dark filter needed

5.3 fps Continuous Shooting
With a 0.1 second start-up time, speedy autofocus, and minimal shutter lag, the EOS 60D is made to capture even rapidly-occurring scenes with stunning precision. Able to shoot up to 5.3 frames per second (fps), capturing a maximum burst of approximately 58 Large/JPEGs and 16 RAW, the EOS 60D DSLR lets you catch even the briefest of moments, whether it's a faced-paced soccer game or the flicker of a candle flame

96% Viewfinder Coverage
The EOS 60D features a redesigned viewfinder that not only offers 96% coverage, 0.95x magnification, a 27° angle of view and user-controlled dioptric adjustment, it also features a transparent LCD display that enables a number of viewfinder displays. A six-level battery check indicator has been added on the left, and the exposure level indicator scale has been expanded to up to three stops, with arrows indicating greater exposure levels

The EOS 60D also features a horizontal Electronic Level, that, when activated, is superimposed on the LCD monitor to aid in achieving evenly leveled shots by indicating the horizontal tilt up to approximately 9° in 1° increments

Enhanced iFCL 63-Zone Dual-Layer Metering System and 9-Point AF System
The EOS 60D features a 63-zone dual-layer sensor designed to complement the 9-point AF system. By taking into account the color and luminosity surrounding chosen AF points, this system delivers an advanced level of accuracy for stunning results even in difficult lighting situations. Since the metering sensor has a color measurement function, exposure errors and focus errors caused by different light sources are minimized; the EOS 60D gives stable exposure from shot to shot in situations where light changes, such as in a theater or concert hall. This makes the EOS 60D ideal for scenes with extreme difference in brightness such as brightly lit scenes or backlit scenes; the camera balances exposure of the main subject at the background, and exposures are not overly influenced by bright areas in the shot. Since the EOS 60D provides high-speed X-sync ("X-sync" means the fastest shutter speed that can synchronize with a flash burst at the moment the shutter is fully released) up to 1/250 sec., the range of photographic expression is dramatically increased, allowing the EOS 60D to be used with confidence in bright scenes or dim

In-Camera Technologies for a Streamline Workflow
The EOS 60D marks a highpoint in convenience for the photographer by being able to shoot an image as a RAW file and then process it entirely in-camera to produce a separate JPEG file without the need of an outside computer. The EOS 60D gives you 10 process variables - brightness adjustment, white balance, Picture Style, Auto Lighting Optimizer, noise reduction, JPEG image-recording quality, color space, lens peripheral illumination correction, distortion correction, and chromatic aberrations correction - to create the image you envision, set to the 3:2 aspect ratio used in 35mm film

Additionally, once you capture an image with the EOS 60D, you can digitally manipulate it in-camera with a number of creative filters for artistic and dramatic effect. Options include Soft Focus Effect to convey dreamy tableaus; Grainy Black-and-White Effect for a gritty, hard-bitten look; Toy Camera Effect - the deliberate vignetting and color shift technique popular in art photography - and Miniature Effect, which blurs the top and bottom edges of the image to emphasize perspective and conveys a miniaturized look of the scene

The 60D can also gives you the option to store recordings to external media sources like USB 2.0 or Wireless LAN/Eye-Fi card (Canon cameras are not guaranteed to support Eye-Fi card functions, including wireless transfer)

Compatible with Canon EF and EF-S Lenses
The EOS 60D is compatible with all Canon lenses in the EF and EF-S lineup, ranging from ultra-wide angle to super telephoto lenses. Canon lenses employ advanced optical expertise and micron-precision engineering to deliver unprecedented performance in all facets of the photographic process. Special optical technologies, such as aspherical, ultra-low dispersion, or fluorite elements are featured in the universally acclaimed L-series lenses. And Canon's Optical Image Stabilizer technology is featured in select lenses to minimize the effect of camera shake. Additionally, photographers can use for video the same lenses they do for still photography; Canon wide-angle, macro, super-telephoto, tilt-shift and fisheye lenses provide a wealth of focal lengths, depth-of-field and other creative shooting options once reserved for stills

Flash Photography
With a flash sync speed of 1/250 of a second, the EOS 60D features the E-TTL II flash metering system. With any of the optional flashes in the EX Speedlite line, E-TTL II provides reliable flash output whether shooting fill-in flash pictures in sunlight, or using flash in total darkness. With E-TTL II, the exact same 35-zone metering sensor used for measuring ambient light is also used for flash metering - giving even finer metering command of the image area. If you prefer a broader area for flash metering, there's a menu setting to change to "Average" flash metering - where the entire 35-zone area is measured evenly for flash exposure. Additionally, the EOS 60D has a Speedlite transmitter built-in for convenient, full-featured wireless control of EX-series Speedlite flashes set as slave units

The optional Canon Speedlite 430EX II is a step-up accessory for powerful flash shooting with the EOS 60D. It has excellent flash power (maximum guide number of 141 ft/43m at ISO 100), and is the perfect way to get great flash pictures when you can't get right up to the subject. The 430EX II is also great for bounce flash, with its tilting and swiveling flash head. It automatically zooms the flash head to cover lenses ranging from 16mm up to 105mm or longer with the EOS 60D. Of course, it works with the camera to provide full E-TTL II automatic flash exposure. And the 430EX II has a powerful AF-assist beam, which allows the camera to autofocus even in total darkness on subjects as far as 32 ft. from the camera