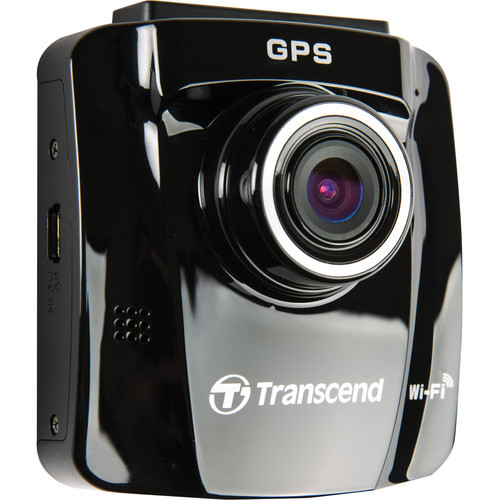 Card Reader All In One, P8 Blk

Let the advanced Transcend DrivePro 220 be your eyewitness on the road. Attach this compact dash cam neatly to your windshield and record everything in front of you. Capture Full HD 1080p30 resolution video in a wide 130° viewing angle. Recording starts as soon as you turn on the car, and stops when you turn the car off. You can also activate recording manually when the car is turned off by pressing the "Emergency" button, as well as take snapshot photos during recording using the Snapshot function. A live view of your recordings is displayed on a 2.4" LCD screen, which can also be used to review recordings later. The DrivePro 220 also features built-in Wi-Fi, a GPS receiver, Lane Departure Warning System, Forward Collision Warning System, Parking Mode, and a built-in battery for when the car loses power.

Wi-Fi capability allows you to wirelessly stream footage to a free DrivePro app for iOS and Android mobile devices. This is useful for quickly and easily reporting possible incidents. (The app can also be used to adjust settings and monitor and review recordings if you connect to the DrivePro 220's dedicated wireless network.) The GPS receiver lets you log GPS coordinates along with date and time into recorded video providing many benefits, including locating exactly where you are at the moment, where you were at the time of an accident, and reviewing the driving paths of an entire journey (this last feature must be done on a computer in combination with the DrivePro Toolbox).

The DrivePro 220 features a 6-glass lens with an f/1.8 aperture that automatically adjusts to light conditions to capture images with detail both day and night. You'll be able to see license plate numbers with sufficient clarity at night time.

Recordings are stored to up to a 64GB microSD card and overwritten continuously every time the card reaches capacity. To prevent an overwrite of important events, a built-in G-sensor stores away recordings captured during occurrences of impact or shock, everything from possible accidents to just hitting a major pothole.

In addition to automatic recording, the DrivePro 220 also features a motion-activated Parking Mode for capturing any incidents when the car is parked. This feature triggers recording if it detects any unusual motion near the vehicle. Parking Mode records for as long as the built-in battery lasts, which is approximately 30 minutes.