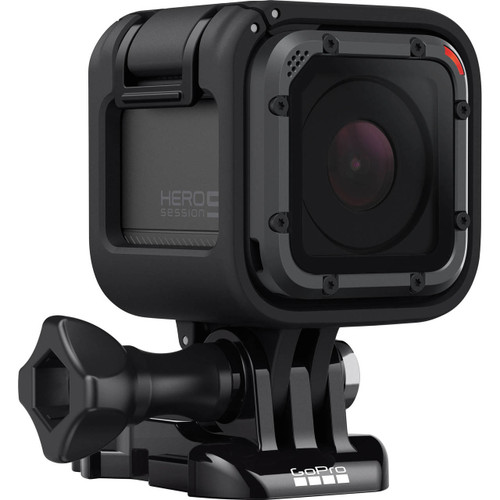 GoPro The Frame for HERO5/6 ,7Black

The HERO5 Session retains the cube-shaped, ultra-compact form factor, and 33' waterproof rating of the original HERO Session. However, it has been substantially updated under the hood to give it performance that approximates the HERO5 Black, most notably 4K video recording at 30 fps. Also in common with the HERO5 Black, the HERO5 Session features electronic image stabilization at HD resolution.

Like the HERO5 Black, you are spoiled for choice with the HERO5 Session’s numerous video modes. These include up to 120 fps in 720p and up to 90 fps in 1080p, with MP4 bitrates up to 60 Mb/s. It also offers the Narrow, Wide, SuperView, and Linear field-of-view settings. Photos are captured at a slightly lower but still respectable 10MP using JPEG compression. Burst and time-lapse modes are likewise available.

Size being the principle concern, the HERO5 Session’s design keeps things as simple as possible. This means an integrated rather than removable battery and all-in-one USB-C port for charging and data transfer. The port also serves as an HDMI output using an available adapter. Here, one-button control really pays off since there simply isn’t room on the body for much more. For additional control and playback capability, you can use Wi-Fi or Bluetooth to pair the HERO5 Session with your mobile device.

With new cameras come new accessories. Since the HERO5 Black incorporates its own housing, accessories will center around the camera itself more than the housing. For most mounting scenarios, the Frame will be your go-to starting point. Surrounding the body for a secure hold, the Frame will allow the camera to attach to most GoPro mounting accessories—new as well as existing. It features the familiar “two-prong,” thumbscrew tightened-style interface dating to the earliest HEROs. There is also an adapter that enables the Frame to lock into the Mounting Buckle system, a quick-release alternative toward which more and more GoPro mounts are moving.

New mounts being released include the small and large Bar Mount. These can be used for handlebars, roll cages, seat posts, and other sorts of tubular configurations. Most notably feature captive thumbscrews—long gone are the days of dropping a wingnut in the snow and losing it forever. There is also an update to the Sportsman Barrel Mount for outdoor and sporting enthusiasts.

While the HERO5 Black is waterproof and not merely “splash proof,” there are times you will want to take it diving or desire the additional protection afforded by an external housing. For you, my friend, GoPro offers the Super Suit Dive Housing. The housing features a capacitive LCD touch backdoor so that you can change settings with agility, as well as review recorded footage without having to remove that camera. Keep in mind the touch function will not work underwater; however, one-button operation will be unhindered.

Since the lens port of the Super Suit Housing is updated from the Dive Housing lens port, a range of new filters for underwater color correction will be available. There will also be a smaller selection of filters that mount directly on the camera itself for shallow water or dry land applications. Furthermore, the integrated housing’s lens protector is removable for easy replacement, should it get scratched or damaged.

For the HERO5 Black, the new REMO remote control provides a simple way to trigger camera functions when the camera itself is mounted inaccessibly. If features a chunky button for one-button operation that can be pressed while wearing gloves. It also features a microphone so that you can take advantage of voice commands even with the camera placed out of earshot.

The HERO5 Black uses a revamped battery system, which means a new spare battery model. To help you charge not only GoPro, but all of your USB-powered devices, look no further than the Supercharger. When used with a GoPro HERO5, the Supercharger yields a high-amp output for fast charging, compared to most other USB chargers on the market. An assortment of plug adapters for international use come included. To charge batteries separately from the camera, there is a dual charger kit. The kit also includes one spare battery.

For those using the HERO5 around the water but not taking it beneath the surface, the Floaty is sure to be a must-have. This high-visibility orange life preserver fits on the camera and makes it easy to spot, should your HERO5 fall overboard. There is a version for the HERO5 Black and another for the HERO5 Session.

Adapter For R Lenses To 4/3 Camera