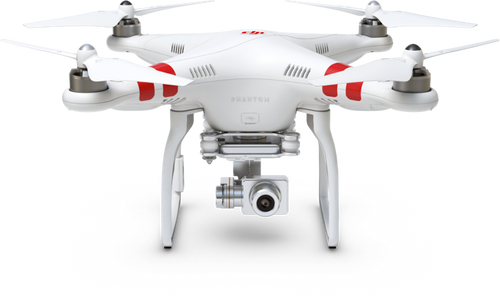 The Phantom 2 Vision+ is based on the same air frame as the Phantom 2 and Phantom 2 Vision. Unlike its siblings, however, it features a 14MP camera that is stabilized and controlled with an integrated 3-axis gimbal. Gimbal stabilization makes the Phantom 2 Vision+ ideal for shooting aerial footage and photos. The camera can take 14MP, Adobe DNG RAW photos, and can record video in 1080p Full HD at 30 fps or 720p at 60 fps for creating slow motion effects.

The Phantom 2 Vision+ ships ready-to-fly, meaning that a radio controller--often referred to as a transmitter is included with it and is pre-bound to the aircraft and that only minimal assembly using common household tools is required. It features a 5200mAh battery that can sustain the quadcopter in the air for up to 25 minutes. The transmitter features a line-of-sight range of up to 2625', depending on conditions.

The camera is controlled via 2.4 GHz Wi-Fi using an app available for iOS and Android devices. Using the supplied mount, you can attach your smartphone directly to the controller, giving you a "heads up" display directly from the camera's point-of-view. From the app you will also be able to start and stop video recording, take a snapshot and even tilt the camera up or down.
Because of the complexity associated with multi-rotor aircraft the Phantom 2 Vision+ relies on a GPS-based navigation system to maintain flight stability and provide other features. While fully manual operation is possible, most users, especially videographers hoping to get the smoothest possible shoots, will opt for GPS attitude mode. GPS attitude mode is an autopilot system that keeps the Quadcopter stable and right-side-up when moving, and holds it in a fixed horizontal and vertical position whenever you release the controls. This is ideal for shooting video because you can compensate for light or moderate wind that might otherwise cause the aircraft to drift.

As with the other Phantom 2 models, 5200mAh battery system is simplified over the original version 1 Phantom. The battery now slots in, and provides LED indicators on outside, tail-end of the aircraft so they can be seen in flight. Charging is also simplified, with all of the charging circuitry built into the battery itself. You simply need to plug it into the wall with the supplied universal AC adapter. A DC car charger, available separable, can also be used.

The Phantom 2 Vision+ includes a Wi-Fi Range extender that will increase the wireless range of the smartphone used for FPV camera operation up to nearly 2300' line-of-sight. The range extender mounts on the transmitter (radio controller) along with the smartphone.

Finally, there is a 4GB MicroSD card included to help get you started filming and taking photos with the 14MP camera.

The second, attitude mode, is a more manual flying mode in which the Phantom Vision does not try and maintain a fixed spatial position. When you release the controls it will continue to drift unless friction slows it down or you stop it. And in this mode it will be more likely to be blown around if there is any wind. This not a true manual mode, however, in that the GPS navigation system is still used to maintain flight stability and by the "return to home" feature in the event of signal loss.

If the Quadcopter loses the signal from the controller for any reason the "return to home" feature will initialize. The aircraft will ascend to 60 feet then make a straight-line course back to the "home position" you will have defined during the GPS calibration process. Once there, it will safely descend to the ground and power itself off
Intelligent Orientation Control (IOC)

IOC is designed to help make flying more intuitive. Nominally, the yaw control will allow the Quadcopter to rotate continuously, which can quickly become confusing if you lose track of which way is "front". Suddenly your controls can get mixed up, where pressing right causes the craft to move left and pressing forward causes it move backward. Intelligent Orientation Control prevents this from happening, keeping the "tail" of the Quadcopter pointed roughly toward the pilot at all times

The DJI Vision App for iOS and Android smartphones provides many functions apart from just FPV monitoring, such as telemetry of vital flight stats including remaining battery and number of GPS satellites and a radar scope to help avoid collisions. It also features full camera control, letting you set parameters such as camera tilt, ISO, Shutter Speed, White balance as well as set video start/stop and take photos. Once recorded, photos and video footage can be downloaded directly to the phone allowing them to be shared on Facebook, Instagram or other social media networks, even while the Quadcopter is still in the air

Windows- and OSX-based software allows you to enable Intelligent Orientation Control (IOC), update firmware, and adjust other aircraft and transmitter parameters. In addition, the software allows you to unlock the manual flying mode. Manual Mode will override all autopilot redundancy and failsafes, therefore should only be engaged by experienced pilots
Slot-In Battery with LED Status Indicators

A 5200mAh battery slots into the "tail" of the Phantom 2 and enables up to 25 minutes of flying time. It features and on/off switch and four LED charge indicators that are visible while flying so you can keep track of remaining flight time. For recharging, balance and power regulation is handled internally within the battery itself. You simply plug it into a wall outlet with the supplied power cord and you are good to go

The Phantom 2 Vision+ features an included 5.8 GHz RF remote transmitter, with dual toggle joystick controls similar to the kind found on other multi-rotor RC aircraft. The left stick controls throttle (up/down) and yaw (essentially rotation). And the right stick controls roll (side-to-side tilt) and pitch (tilting the nose up or down). A switch on the top right lets you choose between Attitude and GPS flight modes and a similar switch on the left lets you select between IOC modes. The control unit also features a detachable mount for holding your smartphone
LED Status Indicator

LED status light on the rear struts of the Phantom 2 Vision provides you with various feedback as well as warnings. Colors alternate between green, amber, and red and can either be flashing or solid. These messages give you valuable information such as whether the GPS system is properly calibrated, warning you the battery is getting low or telling you the remote's signal is out of range

The Phantom 2 features a rotor design that is new for this model. There is no longer a separate prop nut and the threading is designed to be self-tightening, so there is no danger of a loose prop coming off in flight