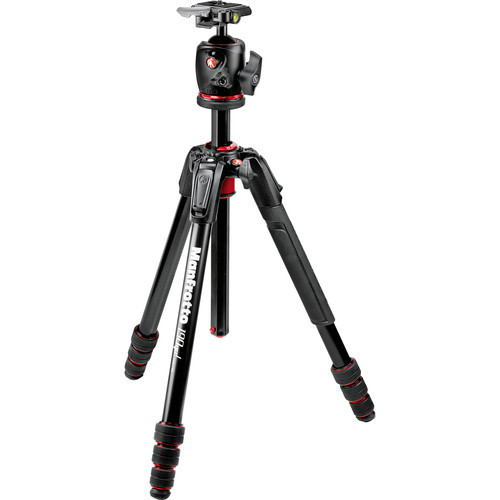 An especially compact yet versatile tripod, the 190go! Aluminum M-Series Tripod from Manfrotto has a maximum height of 59.8" with the center column fully extended, yet its four-section legs afford a folded length of just 17.7". Its aluminum construction weighs 3.7 lb and can support over 15 lb of gear.

Enabling fast setup and take-down, as well as a streamlined profile, the M-Lock System twist locks are used and require just a single 90° rotation movement to swiftly deploy the individual leg sections. The 190go! is also characterized by its center column that can positioned at a 90° angle, parallel to the ground, for working from a minimum height of just 3.5". The independent leg sections, with four set leg positions, benefit working on uneven grounds and D-shaped aluminum tubes offer greater torsional support for greater stability. Additionally, an Easy Link attachment in the top casing extends the versatility of the tripod and allows for attaching an LED light, reflector, or other accessories without the need for an additional stand or rig.

Accurately adjust your camera position with the MHXPRO-BHQ2 XPRO Ball Head with 200PL Quick-Release System from Manfrotto. Able to hold up to 22 lb, the 1.1 lb ball head is strong enough for most applications and ideally suited for an equally sturdy tripod. The XPRO lets you fine-tune your adjustments, thanks to separate knobs for both the ball and the 360° panning as well as a friction control knob for more exacting placement.

The 200PL quick-release clamp and plate allow for quick camera attachment and removal, and two bubble levels let you adjust your camera so the horizon is level. A numbered scale around the base of the head makes repeating exact pans an easy task.