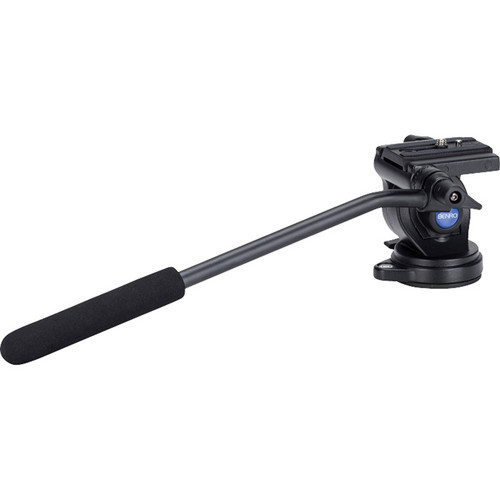 Weighing a mere 0.8 pounds, the Benro S2 Video Head is a compact video head capable of supporting cameras weighing up to 5.5 lb. It has 360° panning rotation for smooth camera moves. There are separate pan and tilt lock levers for lock off shots. The sliding Quick Release (QR) plate on the S2 moves forward and backward to balance the camera. In order to prevent the camera from accidentally falling, the S2 comes with a safety lock for the QR Plate. The switch has to be manually depressed in order to remove the plate from the head.

The integrated bubble level aids in setting up level horizons. The adjustable pan handle can be mounted to either side of the head using the built in mounting rosettes. The S2 can be mounted to ball adapters, tripods, and other camera supports via the 3/8" threaded female receiver on the 60 mm magnesium alloy flat base.