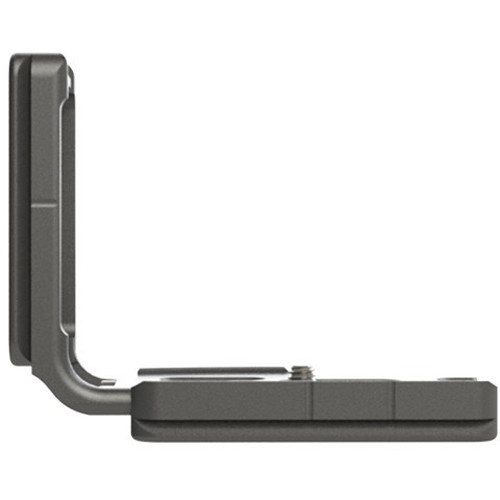 This BL-80DN L-Bracket for Canon 80D from Kirk Enterprises is an Arca-type compatible bracket machined from 6061-T6 aluminum alloy. Meticulously designed, it enables fast changes between portrait and landscape orientation while maintaining access to your cameras valuable connection ports and battery compartment.

The concept of the L-bracket removes the need to re-adjust your tripod head and completely recompose for different shots. The user can simply release the bracket from nearly any Arca-type compatible quick release clamp, tilt it 90°, and lock the bracket back in place. During re-adjustment, precise positioning is maintained by aligning both your camera and clamp with the centering lines engraved into the L-bracket's base and side. Using an L-bracket also facilitates a sturdier base of support than tilting an entire head to a 90° position and puts less strain on your support gear.

For camera attachment the plate features a captive 1/4"-20 stainless steel mounting screw—an adjacent 1/4"-20 socket is also included for directly mounting the bracket without an Arca-type clamp. The base of the bracket also includes an integrated hand strap loop for those who use a hand strap which requires use of the camera's tripod socket.

The "N" series of Kirk L-Brackets, much like their predecessors, are constructed of two separate parts—a base plate and side-arm—which appear detachable in the images above. It is important to note that the screws attaching the vertical side-arm to the base plate are not removable and thus, the L-Bracket may not be disassembled.