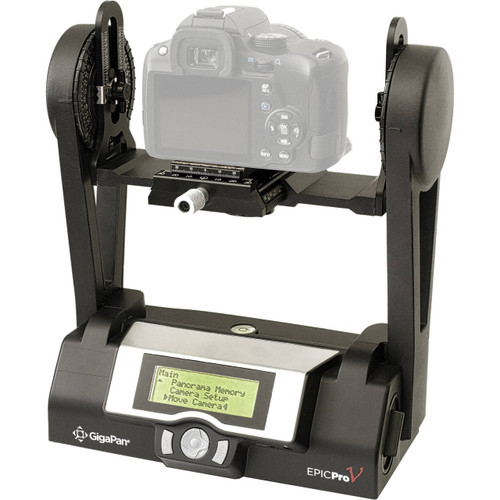 A robotic camera mount designed for multimedia image-makers, the EPIC Pro V from GigaPan enables automated multi-shot stitched image capture along with continuous movement modes for producing dynamic videos and motion time-lapses. Utilizing a 360° horizontal panning base with 180° vertical tilt, a range of movements can be used to perform creative effects during video or time-lapse recording, and both axes can be operated simultaneously to produce diagonal movements. Benefitting still photographers, the mount also supports capturing multi-frame panoramas and gigapixel imagery, with the ability to record up to 20 frames per shooting position for HDR and exposure bracketing applications.

All shooting modes can be configured on the EPIC Pro V, using the backlit menu and button-based navigational system for intuitive settings adjustment. The mount supports camera and lens combinations up to 10 lb and incorporates both 1/4"-20 and 3/8"-16 mounts for attaching to most tripods. Additionally, included with the mount is GigaPan Stitch software, which can be used to seamlessly produce finished panoramic and gigapixel imagery during post-production.