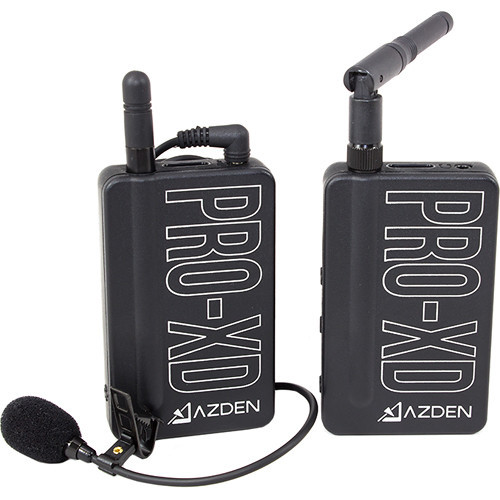 The PRO-XD from Azden is a 2.4 GHz digital wireless lavalier system that has over a 100' range with automatic frequency scan and sync capabilities. It can be used to capture audio in several environments for applications such as camcorders, DSLR, mobile devices, recorders, and more.

The PRO-XD system features a PRO-XDT bodypack transmitter, a PRO-XDR camera-mount receiver, and an EX-503XD lavalier microphone. The receiver is built with mic and headphone output jacks. The bodypack transmitter includes a line level jack and a mixed input jack to allow for several source options.

The PRO-XD's transmitter and receiver are powered by internal lithium-ion batteries, and each can operate for over 10 hours when fully charged. In addition, up to four systems can be used simultaneously with no interference.

Finally, set up is a breeze with automatic syncing between receiver and transmitter. The EX-503XD lavalier microphone features an omnidirectional polar pattern with a frequency response of 30 Hz to 20 kHz. The PRO-XD system also includes an 1/8" mini-output cable, a USB cable, a lapel clip, a shoe mount, and a battery charger.