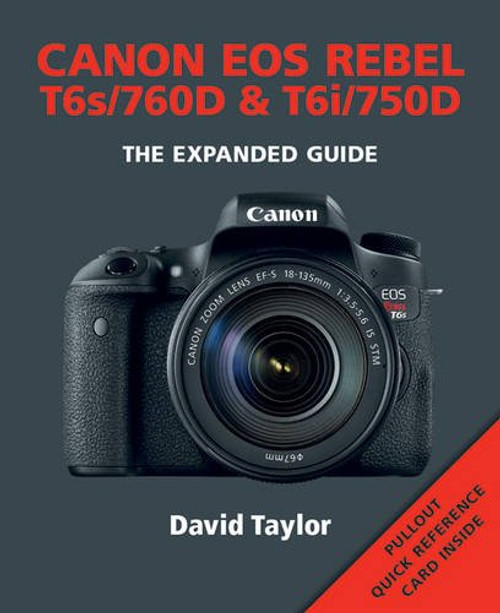 Aimed at beginners stepping up to DSLR photography, the Canon Rebel T6s/EOS 760D is the new flagship model for the company's line of interchangeable-lens DSLR cameras, which inherits a broad range of features from the mid-range EOS 70D. It is launched simultaneously with the Rebel T6i/EOS 750D, a cheaper model with fewer features. Although their body designs are notably different, the two models essentially have only slight differences. The layout and controls of the T6s are intended to appeal to a higher-end photographer, and include a top-mounted LCD display. The rear-panel four-way controller is replaced by a Control Dial interface, making it appealing for the T6s to serve as a second body alongside a higher-end Canon model. Internally the T6s contains a 24.2-megapixel CMOS image sensor, the highest resolution yet provided by a Canon APS-C format DSLR. Output is handled by a DIGIC 6 image processor. This combination provides an ISO sensitivity range of 100–12,800 (expandable to 25,600) and a burst rate of five frames per second. The T6s can automatically disable the LCD monitor when the viewfinder is brought to the eye, due to a proximity sensor above the eyepiece. It also features a single-axis electronic level function, and offers several live-view and movie-mode capabilities not found in the T6i. It can also adjust focus between frames in burst-mode live view shooting, to capture high dynamic range movies, and to digitally "zoom" movies during capture by cropping the sensor window. Both cameras offer 19-point, cross-type phase-detection autofocus with Hybrid CMOS AF III autofocus, improving performance and tracking in live-view shooting. They also have 7,560 pixel RGB+IR metering sensors and locking mode dials. Their viewfinders include the Intelligent Viewfinder overlay function, (a Rebel-series first). In-camera Wi-Fi networking with Active NFC (Near Field Communication) allows the camera to pair with compatible Android devices. Also included is Silent Shooting mode support, flicker detection, and lens distortion correction.

Introduction To The Nikon D200