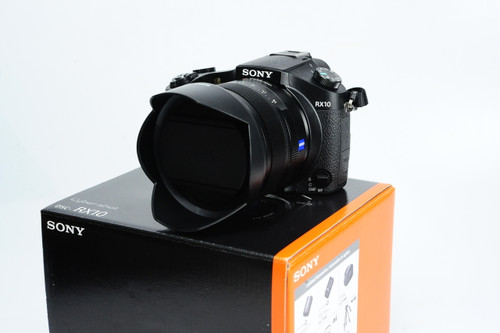 A new Direct Drive, Supersonic Wave Motor (SSM) provides fast and smooth autofocus action while Eye AF enables precise eye-detection focusing with confirmation that a subject's eye is in focus even if their head is partially turned. Flexible Spot areas allow precise focus placement, and Lock-on AF keeps focus locked on a moving subject, even if that subject leaves the frame momentarily. Seamless close-up shooting is also supported, which no longer requires the need to switch to a dedicated macro mode, for focusing on subjects as close as 11.8".

For image composition and playback, the RX10 features a large 3.0", 1228K-dot, Xtra Fine LCD monitor with a tilting design to better serve working from high and low angles. WhiteMagic technology is incorporated into the display to increase the effective brightness of the screen. Also, the XGA OLED Tru-Finder electronic viewfinder integrates four aspherical elements for sharp eye-level composition. An automatic eye-sensor recognizes when an eye is at the viewfinder and illuminates the EVF while turning off the LCD.

Full HD 1080 video is supported in both 60i/p and 24p frame rates and in both AVCHD format and MP4. A built-in stereo microphone and an external mic jack are provided as is a headphone jack from audio monitoring. Professional features such as full manual exposure control and uncompressed off-camera recording are also supported.

Built-in Wi-Fi and NFC (Near Field Connectivity) allow for easy wireless connections to smartphones and tablets in order to transfer images for sharing as well as to use your smartphone as a remote control via the free Sony PlayMemories app.

The compact magnesium alloy body of the RX-10 is moisture and dust resistant. It offers a built-in pop-up flash as well as the Sony Multi-Interface shoe for connecting flashes, microphones, lights, monitors, and other accessories. A multi-compatibility card slot enables the use of SD series, micro-SD series, and Memory Stick memory cards. A selectable click or click-less manual control ring on the lens lets you adjust numerous camera settings without taking your eye from the image and customizable buttons provides fast access to the camera settings that you need most.

Built-In Wireless and NFC Connectivity
Built-in wireless connectivity enables the RX10 to instantly transfer imagery to mobile devices for direct sharing with social networking sites, via email, and to cloud storage sites. NFC (Near Field Communication) is also supported, which allows for one-touch connection between the camera and compatible Android mobile devices; no complex set-up is required. This technology when used with the free Sony PlayMemories Mobile app also provides the ability to use Smart Remote Control, which provides for remote shutter release that is controlled by a smart device.

Full HD 1080p Video Recording with Stereo Sound
Full HD 1920 x 1080 video recording is supported in multiple frames rates, including 60p, 60i, and 24p. When recording in Full HD, the AVCHD Ver. 2.0 codec is used for highly detailed image quality that translates well to editing and sharing on HDTVs. Recording in the Internet-friendly MP4 format is also supported in 1440 x 1080 and 640 x 480 sizes at 30 fps. Manual exposure control is available in video mode. Sound is recorded during filming using the built-in stereo microphone, or additionally, an external microphone can be used in conjunction with the multi interface shoe. A headphone jack allows you to monitor sound directly from the camera and a built-in HDMI output terminal provides direct connection to your HDTV, computer, or external recorder for real-time uncompressed video recording.

High-Resolution LCD Monitor
For live view monitoring, image playback and review, and menu navigation, a 3.0" 1228K-dot LCD monitor is integrated into the camera body and features a tilting design to promote easier use from high and low angles. The screen can tilt approximately 84° up and 45° down, giving a wide range of viewing angles. The LCD also employs WhiteMagic technology, which enhances the brightness of the display for easier use in bright conditions. Real-time image adjustment can be seen on the monitor and Grid Display and Peaking can be customized for better image control.

XGA OLED Viewfinder
See spectacular clarity, contrast, and detail in every scene, regardless of conditions, on the built-in, bright, high-resolution OLED Tru-Finder electronic viewfinder. Four dual-sided aspherical lenses provide a big, 33º view angle and maintain excellent edge-to-edge visibility of the electronic viewfinder. An eye-sensor on the viewfinder senses when your eye is at the finder and illuminates it while simultaneously turning off the LCD monitor.

Precise Autofocus Tracking and New Eye EF Function
Lock-on Autofocus precisely focuses on moving subjects by continuously adjusting target frame size based on its recognition of subject characteristics. Even when a subject goes out of frame temporarily, tracking resumes at the moment that it is recaptured after re-entering the frame. Advanced Eye Detection technology creates Eye AF Function which detects and focuses on the subject's eye even if the head is turned slightly.

Close-up Focusing
Close-up shooting is seamless and no switching to macro mode is needed. The minimum focus distance for the RX10 is a constant 11".

Optical SteadyShot Image Stabilization
Optical SteadyShot image stabilization works to minimize the appearance of camera shake when working in low-light conditions or with greater zoom magnifications. The system can counter the effects of both vertical and horizontal movements, and, furthermore, Active 3-Way stabilization adds digital rolling control that balances both clockwise and counter-clockwise movements while recording videos.

Diffraction-Reducing Technology
This maintains outstanding clarity by applying aperture-appropriate filter processing to suppress and compensate for diffraction - a phenomenon that can otherwise limit photographic resolution and cause points of light to appear blurred, especially in images that have been shot using a small aperture (large f-number) setting.

Area-specific Noise Reduction
Noise reduction, even in images shot in low light, is individually adjusted based on imaging pattern variations for superior clarity and finer details.

Built-In Flash and Multi-Interface Shoe
A convenient pop-up flash with several flash modes is provided but the RX10 features the advanced Multi-Interface Shoe that dramatically expands compatibility with Sony digital imaging accessories such as flash units and microphones, thus increasing the potential of your photo and movie shooting.

Selectable Click/Click-Less Manual Control Ring
The manual ring gives you direct control of certain settings, zooming, and focusing, according to the focus mode in use. In addition, before turning the aperture ring to set f-stop, you can turn Aperture Click Switch on for clicked aperture adjustment or off for a quiet, smooth feel when setting the aperture. A display panel on top lets you see key settings without moving the camera as you look through the viewfinder.

Advanced Interface and Customizable Buttons
A new, improved graphical user interface makes access to frequently used functions easier, just press the Fn button to display a list of them. In addition, seven control buttons can be customized to adjust up to 40 function types for faster, personalized access to camera controls

TRILUMINOS and 4K Compatibility
The RX10 supports Sony TRILUMINOS Color for exceptionally rich, natural colors when viewing images on a TRILUMINOS display. Also, photos can be viewed on a 4K television via HDMI or wireless output.