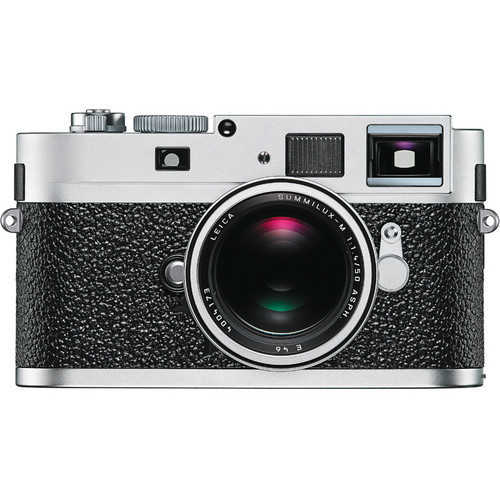 Sister to the M9, the Leica M9-P Digital Camera carries forth all the same technology of its predecessor, with enhancements towards an even more discrete design. Minimalist, and all camera, the M9-P stands out in subtle but beneficial ways for the street photographer. It also follows in the footsteps of hallowed Leica tradition, harkening back to the 1950s, and the original MP "press" camera designed for Magnum shooters.

Perhaps the most noticeable difference between the two cameras is the lack of the red Leica dot on the front of the body. This alteration ensures even less attention will be drawn to the photographer with this unassuming camera. Instead of the traditional Leica logo, the M9-P has what Leica terms a, "restrained Leica logogram," on the top deck of the camera. Another feature of the M9-P is the vulcanite leathering on the body. In addition to looking exceptionally attractive, the leathering provides a good grip.

A third difference between the M9 and this, its reincarnation, is an extremely scratch-resistant sapphire crystal cover for the 2.5" LCD monitor. When being stealth is of the utmost, the traditional camera bag is usually not part of the picture. Consequently, the camera is prone to more of life's hazards. Sapphire crystal is exceptionally hard, making it almost unbreakable, and therefore, extremely protective of the M9-P's LCD display. The sapphire crystal cover also features an antireflective coating on both sides for optimal image viewing, even outdoors.

The M9-P boasts all the same remarkable image making characteristics of the M9; image quality, after all, is the hallmark of a Leica camera. The 24 x 36 18Mp CCD image sensor provides full size 35mm image capture in the digital format. All M lenses mount to the M9-P as well, for a wealth of choices to make the most of each shot. And even though the M9-P and M9 are digital, they still provide the user with the classic feel of a film rangefinder. Perhaps inspiring in the shooter a taste of the old days, yet putting all the benefits of digital at hand. With that being said, the intuitive interface and menu controls of the M9-P make it a joy to use.

Focused on Essentials - Maximum Image Quality
The Leica M9-P, a camera that carries the legend of Leica M cameras into the digital age. It is the smallest full-format digital system camera the world has ever seen. In a nutshell: it is a contemporary tool for all who demand the highest standards in image quality and love freedom of composition

24 x 36 - Full Frame
The combination of an extremely high-resolution image sensor, the superior performance of M lenses, and sophisticated processing of the captured digital information ensures the best imaging results in all photographic situations. The 18 megapixel CCD image sensor, specifically designed and developed for this camera, enables the capture of the full 35mm film format without any compromises. All M lenses mounted on the M9 or M9-P offer the same angle of view they had when using film material. This means that the high resolution and unique imaging quality of the now-digital M9 and M9-P are capable of fully exploiting the enormous potentials of M lenses. Or, in other words: in the case of the M9 and M9-P, it wasn't a matter of modifying the lenses to match the image sensor, but rather the other way around. This results in images particularly rich in details. Natural. Authentic. Without compromise

Intuitive Handling
When it comes to handling, the Leica M9-P concentrates on essentials. It has even been possible to further improve the already simple menu navigation. The key control element is an intuitive four-way switch and dial combination used in conjunction with the 2.5" monitor. Setting the sensitivity requires only constant pressure on the ISO button while simultaneously turning the dial to select the required setting. All other functions important for everyday situations are quickly and easily accessible by pressing the "Set" button: these include white balance, image-data compression, resolution, exposure correction, exposure bracketing, and programmable user profiles. The user profiles can be programmed with any camera and shooting settings, stored under an arbitrary name, and accessed quickly whenever required for a particular situation

Compact and Built for a Lifetime
It is not rare for a Leica to become its owner's lifelong companion. This also applies to the digital Leica M9 and equally to the M9-P: despite the considerably larger sensor, it has been possible to maintain the compact body size of their predecessors, the Leica M8 and M8.2. With dimensions of only 139 x 37 x 80mm, the Leica M9 and M9-P retain the ideal size of the M series and the unique honor of being the world's smallest full-format digital system cameras. The one-piece, full-metal housing, made from a high-tensile magnesium alloy, and a top deck and bottom plate machined from blocks of solid brass, provide perfect protection for their precious inner mechanisms. The digital components and shutter assembly of the M9 and the M9-P are similarly constructed with a lifetime of endurance in mind. Free updates ensure that the cameras' firmware always embraces the latest developments. In short: an M camera is not only an investment for life, but also a lifelong companion

Unobtrusive, Discreet, and Resilient: The Leica M9-P
The M9 now has a twin sister, the Leica M9-P. In technological terms, they are absolutely identical twins and feature precisely the same high performance qualities. The only differences are found in a few characteristic details

The compact size of Leica M cameras, their unobtrusive looks, minimalist design, and the almost inaudible sound of their shutters make it possible for Leica M photographers to virtually melt into the background. The M9-P now makes photography even more unobtrusive - instead of the red dot on the front, it now bears a restrained Leica logogram on the top deck. And, in turn, is even more discreet

The Leica M9-P now features an extremely scratch-resistant, almost unbreakable, sapphire crystal cover for its LCD monitor display. Sapphire crystal is one of the world's hardest materials and so hard that it can only be worked with special diamond-cutting tools. The antireflective coating on both sides of the monitor cover glass further improves image reviewing, particularly in unfavorable lighting conditions

Measurement Cell for Available Light
Silicon photodiode with condensing lens, positioned in the bottom center of the camera base

Matching of Viewfinder and Actual Picture
The size of the bright-line frame corresponds exactly to the sensor size of 23.9 x 35.8mm at a setting distance of 1 meter. At infinity setting, depending on the focal length, more is recorded by the sensor than indicated by the corresponding bright-line frame and slightly less for distances shorter than 1m

Viewfinder Display
LED symbol for flash status. Four-digit seven-segment digital display with dots above and below, display brightness adjusted for ambient brightness, for: warning of exposure compensation, display for auto generated shutter speeds in aperture priority mode, indication of use of metering memory lock, warning that the metering or setting ranges are over or underexposed using aperture priority and counting down exposures longer than 2 seconds

LED light balance with two triangular and one central circular LED for manual exposure setting. The triangular LEDs give the direction of rotation of the aperture setting ring and shutter speed setting dial to adjust the exposure. Also as warning for over or underexposure

Switching the Camera On/Off
Using the main switch on the camera's top panel, selectable automatic power-off for camera electronics after about 2/5/10 minutes, reactivation by pressing the shutter release button