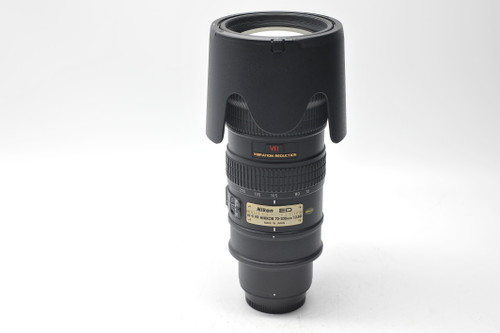 * Sold exclusively in the USA
*1 P includes AUTO (General-Purpose Program) and Vari-Program System
*2 Manual (M) is not available
*3 This lens is not compatible with the F3AF
Note: There may be some restrictions or limitation for available functions. Refer to your camera's instruction manual for details.

When using the lens with cameras other than those listed above, set the vibration reduction mode switch to OFF to cancel the vibration reduction mode.
With the Pronea 600i/6i camera, in particular, battery power may become depleted quickly if this switch is left ON.
With this lens, you can take pictures at shutter speeds approx. 3 stops slower than you ordinarily could without using a VR lens, expanding the range of usable shutter speed options and making telephoto shooting much easier without a tripod.