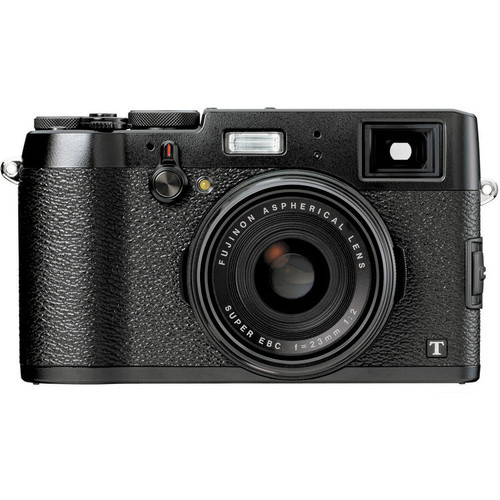 Furthering their hybrid ethics with regard to camera design, the black X100T Digital Camera from Fujifilm continues their position of pairing contemporary aspects of imaging technology with well-respected themes from iconic cameras. Utilizing their proprietary sensor design, this rangefinder-styled camera features an APS-C-sized 16.3MP X-Trans CMOS II sensor to realize the utmost in image clarity and sharpness due to the randomized pixel array that eschews the conventional optical low-pass filter. Complementing the imaging assets, refined handling and viewing technologies have also been utilized, including an Advanced Hybrid Viewfinder that pairs both optical and electronic viewing methods along with an electronic rangefinder for enhanced manual focusing and monitoring capabilities. Cementing this camera within the realm of versatile and efficient, it is also fitted with a fixed 35mm-equivalent f/2 lens to benefit working in everyday shooting situations. The X100T sees the increased dependency on classic themes to better inform contemporary technologies, and combines both schools of thought into a practical and capable image-making device.

Enhancing the capabilities of the X-Trans sensor design, an EXR Processor II is also utilized to deliver notable low-light sensitivity with maximum extended ISO 51200 and fast performance throughout the camera, including a continuous shooting rate of 6 fps, Intelligent Hybrid AF, full HD 1080p video recording, and fast start-up, shutter lag, and shooting interval times. A redesigned shutter mechanism, which is now entirely electronic, also delivers quickened shutter speeds up to 1/32,000 sec. for capturing the fastest of movement or working in bright conditions with wide apertures. Conversely, the Fujinon lens also incorporates a 3-stop neutral density filter into its design to enable the use of slower shutter speeds and wider apertures for greater control over focus and movement. For further adjusting the appearance of imagery, Fujifilm has tapped into its history of producing film, and offers a range of Film Simulation modes, including the Classic Chrome mode, to mimic the specific qualities and colors of different film emulsions.

Benefitting the imaging capabilities with respect to handling, the body's design features magnesium alloy top and bottom plates as well as a dial-based design theme to offer both durability and intuitiveness during shooting. A rear 3.0" 1.04m-dot LCD monitor avails a large means for live view shooting or image playback and a dedicated command dial and four-way controller give way to efficient settings adjustment. Additionally, built-in Wi-Fi connectivity enables the use of linked mobile devices to both transfer imagery to and remotely control the camera from, via the Fujifilm Camera Remote app.

16.3MP APS-C X-Trans CMOS II Sensor
A large 16.3MP APS-C CMOS image sensor is integrated into the X100T to provide high image quality and detail. Using Fujifilm's unique X-Trans pixel array, the sensor is designed with a randomized pixel pattern to eliminate the need of an optical low-pass filter for reducing moiré and aliasing. By removing this filter from the design, higher image sharpness is possible. Lens Modulation Optimizer (LMO) factors are also taken into account using the EXR Processor II, which helps to automatically compensate for aberrations and diffraction blur in order to produce images with the utmost inherent sharpness. The image sensor also utilizes backside illumination technology to help with the integration of phase-detection pixels into the sensor for improved autofocus performance without affecting image quality.

The X-Trans sensor also pairs well with the EXR Processor II to provide highly effective noise reduction and a clean signal-to-noise ratio. This enables smoother-looking imagery that becomes especially apparent when photographing in low-light situations with an expandable sensitivity range of ISO 100-51200.

EXR Processor II
Aside from benefitting low-light performance, the EXR Processor II also provides quick performance throughout the entire camera system. The camera start-up time is about 0.5 second, shutter lag is about 0.01 second, and the shooting interval time is about 0.5 second. Additionally, this processing power provides enough speed to capture full resolution images at a continuous rate of 6 fps for up to 25 consecutive full-resolution JPEGs, or at a rate of 3 fps for the capacity of the memory card.

Fujinon 23mm f/2 Fixed Focal Length Lens
The built-in 23mm f/2 fixed focal length lens gives a 35mm-equivalent focal length of 35mm, making it an ideal single prime lens length for everyday shooting. This fast wide-angle lens is purposefully designed as non-interchangeable and non-collapsible in order to garner the highest optical quality possible. The rear lens group is designed with a large diameter in order to allow its position nearer to the sensor to render an overall slim profile for the whole camera. This closeness to the image sensor also provides optimal edge-to-edge sharpness and illumination for enhanced image quality.

The simple lens construction is comprised of just eight elements within six groups, including a single double-sided aspherical element, for innate reduction of distortions and aberrations. Lens elements also feature an HT-EBC coating to reduce lens flare and ghosting while maintaining image contrast and color fidelity.

A three-stop neutral density filter is also incorporated into the design to allow for greater control over exposure durations and to promote the use of wider apertures. This allows for a more fluid rendering of moving subjects as well as enhanced control over your focus plane. A nine-blade aperture diaphragm benefits the ability to shoot with wider apertures by producing a more aesthetically pleasing out of focus image quality. Additionally, this lens is capable of focusing on subjects as close as 3.9" / 10cm for macro-like shooting.

Advanced Hybrid Viewfinder
Both optical and electronic viewing means are incorporated into the unique Advanced Hybrid Viewfinder, which provides both the simplicity of an OVF with the technological advancements of an EVF. Switching between both viewing methods is done with the dedicated OVF/EVF switching lever, enabling quick transitioning between both modes. The OVF has its benefits in providing a clear, unadulterated view of the scene you're photographing and reduces the shutter lag time to a minimum. For fine-tuning of focus, exposure, white balance, and other camera settings, the EVF gives you the ability to monitor all of the applied settings prior to making the exposure.

An enhanced optical viewfinder now incorporates an electronic rangefinder mode, harking to traditional mechanical rangefinder cameras of which this camera gains its appearance from, and permits refined and comparative manual focusing methods. Real-time parallax correction enables more accurate framing, as does 92% frame coverage, to allow you to both focus and compose simultaneously.

In contrast, the high-resolution 0.48" 2.36m-dot EVF provides you with 100% frame coverage along with the ability to utilize electronic focusing aids for precise manual focus control. By using the phase-detection pixels located on the imaging sensor, Digital Split Image is able to assist in acquiring precise focus by showing comparative in and out of focus areas of the image. Also contributing to manual focus accuracy, focus peaking has been integrated and enables a more objective system of focusing by way of highlighting sharp edges and lines of contrast in a clear manner.

When working with the EVF, you can also utilize Shooting Effect Reflection settings in order to preview and utilize selected camera effects, such as Film Simulation modes. When this setting is turned off, the image will revert to a natural view, void of any exposure or camera settings applied, to better suit working in darker conditions and to greatly reduce any display lag.

Converse to both eye-level viewing methods, the X100T also incorporates a large 3.0" 1.04m-dot LCD monitor into its design. This screen is especially well-suited to image review and menu navigation, as well as when working from a tripod for a larger viewing display.

Body Design
Reminiscent of traditional film cameras, the X100T features a classic design accentuated by die-cast magnesium alloy top and bottom plates and a knurled aperture ring and control dials. The fixed lens features a manual aperture ring with 1/3 EV click stops throughout the aperture range. The exposure compensation dial is also indexed in 1/3 stops from -3 to +3 EV. On the rear of the camera body, a command dial enables quick, intuitive selecting of camera modes and pairs well with the four-way controller for efficient handling. Additionally, seven customizable Fn buttons are placed about the body and can be programmed to control settings of your choosing.

Three focus modes are available (AF-S, AF-C, and M) for greater control over how the X100T achieves sharp focus. Additionally, a built-in AF assist lamp is available for aiding the focus system when photographing in low-light situations.

Film Simulation Mode
Taking advantage of Fujifilm's vast history in traditional film-based photography, the X100T integrates several Film Simulation modes to mimic the look and feel of some Fujifilm's classic film types. A refined Classic Chrome mode is designed to deliver muted tones and a deep color reproduction, similar to that of a dated slide film. Pulling from their more contemporary line of transparency films, Provia offers natural-looking tones for everyday shooting, Velvia produces a more dramatic and rich tonality with deeper color saturation, and Astia gives less contrast for a softer depiction of skin tones. Mimicking their negative films, Pro Neg. Std. gives smooth image tones that are suitable for accurate color renditions, while Pro Neg. Hi produces a more dramatic feel with the ability to draw color out of a variety of lighting conditions. In addition to the colorful benefits of these Film Simulation modes, there are also monochrome modes that simulate the look of traditional yellow, green, and red black and white contrast filters. A sepia mode is also available for producing an inherently nostalgic look.

Full HD Movie Recording
Full HD movie recording is possible with multiple NTSC and PAL frame rates and formats up to 1920 x 1080p at 60fps to produce smoothly-depicted movement. A high bit-rate of 36Mbps enables greater clarity when shooting video, which is ideal for showcasing your movies on an HDTV utilizing the built-in HDMI mini connection.

Manual focusing, white balance, aperture, shutter speed, and ISO controls during movie recording are supported, as well as an automatic scene recognition mode, and an optional external microphone can also be used to record high-quality sound void of any in-camera noise. Furthermore, you can also record movies even while using the optical viewfinder for monitoring.