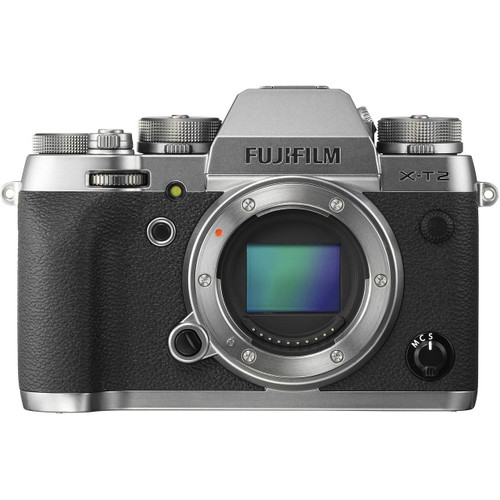 Offering a more conventional form factor and packing in UHD 4K video recording, Fujifilm's X-T2 Mirrorless Digital Camera certainly aims to fill the needs of many working professionals. Equipped with a 24.3MP APS-C X-Trans CMOS III image sensor and the X-Processor Pro Engine, users will be able to capture finely detailed imagery quickly and with low noise at sensitivities up to ISO 51200. The powerful combination permits rapid image capture at up to 8 fps with full AF tracking or at up to 14 fps using the silent electronic shutter. In terms of AF, the X-T2 uses an Intelligent Hybrid system with 325 points that ensure accurate, fast tracking of subjects in all modes.
For video, the X-T2 offers internal UHD 4K video as well as an 8-bit 4:2:2 HDMI output. The internal recording offers 100 Mbps bitrate for capturing fine details with ease. Along with this an F-Log Gamma setting will be available for capturing a flat picture best used in serious grading applications. Fuji's array of Film Simulations and Grain Effects can also be used here, for both photo and video shoots.
Improved handling is a key upgrade in the X-T2, incorporating a larger grip, locking dials, raised buttons, and more to make operation smoother. The weather-sealed body also sports a 0.5" 0.77x 2.36m-dot OLED EVF with a larger eyecup for comfortable composition and a base refresh rate of 60 fps, which can be boosted to 100 fps. There is also a 3.0" 1.04m-dot three-way tilting LCD screen for alternative viewing options. This screen has a unique tilt that permits shooting at odd angles, including in the portrait orientation. Additionally, it has a focus lever joystick that allows for rapidly adjusting and changing the selected AF point or area.

The special Graphite Silver Edition of the X-T2 features a uniquely durable and aesthetic triple layer coating finish that serves to both protect it and give it visual appeal. Succeeding an initial antioxidant treatment to the magnesium alloy body, a matte black primer coat is first applied. This helps to develop a shadow-like appearance that also accentuates the highlights developed by subsequent coats. The second step in the finishing process involves rotating the body at high speeds while thin strips of paint particles are layered using computer-controlled Thin-Film Multilayer Coating Technology, which produces the smooth graphite silver-colored look. Finally, a clear coat is applied for added durability and shininess based on the ambient lighting conditions.

Beyond the unique coating and appearance of the camera, this special edition X-T2 also includes a matching graphite silver EF-X8 shoe-mounted flash, a leather camera strap, and an aluminum hot shoe cover.

When paired with the X-Processor Pro, the sensor is also capable of producing clean image quality with reduced noise values, along with a native sensitivity range up to ISO 12800 that can be expanded to ISO 51200.

Aside from benefitting the low-light performance, the X-Processor Pro also contributes to fast performance throughout the camera system, including a start-up time of 0.3 seconds, shutter lag time of 0.05 seconds, shooting interval time of 0.19 seconds, and AF speeds of up to 0.08 seconds. Coupled with the on-sensor phase-detection AF, up to 8 fps continuous shooting is also possible with full-time motion predictive AF for tracking fast-moving subjects while shooting. The ability to record compressed raw files also helps to expedite file transferring for longer continuous burst shooting, and both a fast top focal plane shutter speed of 1/8000 sec and a flash sync speed of 1/250 sec further contribute to shooting versatility.

Beyond stills shooting, the X-T2 is the first Fujifilm mirrorless camera to offer UHD 4K video recording options. It records this ultra high resolution 3840 x 2160 footage at an excellent 100 Mbps bitrate and with a minor 1.17x crop of the sensor. It also uses a 5120 x 2880 sample of the sensor that is 1.8x more resolution than the UHD 4K frame that is created, ensuring maximum resolution and detail is provided. Footage can be recorded internally for up to about 10 minutes, though with the addition of the optional Vertical Power Booster Grip users will be able to record for up to 30 minutes with ease. Also, the camera features a 3.5mm microphone jack for more advanced audio solutions. Users looking for a headphone jack will find one on the optional Vertical Power Booster Grip.

Along with the vastly enhanced recording capabilities, the X-T2 offers an F-Log Gamma setting that provides a flat picture for use in advanced color grading software during editing. This should maximize the potential dynamic range in difficult scenes. Image adjustments can be made as well to highlight tone, shadow tone, color, and sharpness. Additionally, HDMI output is supported with an 8-bit 4:2:2 signal and users will be able to use Film Simulation effects to capture unique video.
OLED Electronic Viewfinder and 3-Way Tilting LCD Screen
There are two distinct ways to monitor and compose images on the X-T2, an electronic viewfinder and a rear LCD screen, depending on your particular needs. The 0.5" EVF offers a high 0.77x magnification along with a 2.36m-dot resolution that ensures crisp imagery. Along with these features, the EVF uses an OLED display that provides deep blacks and rich, vivid colors. To ensure a clear view, the EVF offers a base refresh rate of 60 fps which can then be boosted to 100 fps for moments of intense action.

The rear 3.0" LCD screen received its own upgrades, especially with the introduction of a three-way tilt mechanism. This allows photographers and videographers to work in a variety of odd angles, including portrait orientation shooting. The screen features a high 1.04m-dot resolution for crystal clear viewing.

Blending both phase- and contrast-detection focusing methods, the X-T2 is capable of acquiring focus both quickly and accurately. The entire system is comprised of 325 points, of which there are numerous phase-detection points for faster performance that is beneficial to photographing moving subjects. Approximately 50% of the width and 75% of the height of the imaging area is covered by phase-detection points, too, to offer greater compositional freedom without sacrificing fast autofocus performance. The majority of the frame is then also covered by an apt contrast-detection focusing system that has been quickened by the camera's refined processing power for more versatile control. For refined manual focusing control, Focus Peaking is available to highlight lines of contrast in the scene to more objectively determine sharp focus.

Continuous AF modes have been seriously upgraded, as the X-T2 now offers customization of a variety of settings in order to dial in the performance for your specific subject matter. This includes changing the sensitivity, speed, and more to ensure that just what you want to capture is in focus.

Taking advantage of Fujifilm's vast history in traditional film-based photography, the X-T2 integrates several Film Simulation modes to mimic the look and feel of some of Fujifilm's classic film types. For monochrome shooting, the Acros mode offers smooth tones, deep blacks, and fine detail reminiscent of the Neopan 100 Acros film type. A refined Classic Chrome mode is designed to deliver muted tones and a deep color reproduction, similar to that of a dated slide film. Pulling from their more contemporary line of transparency films, Provia offers natural-looking tones for everyday shooting, Velvia produces a more dramatic and rich tonality with deeper color saturation, and Astia gives less contrast for a softer depiction of skin tones. Mimicking their negative films, Pro Neg. Std. gives smooth image tones that are suitable for accurate color renditions, while Pro Neg. Hi produces a more dramatic feel with the ability to draw color out of a variety of lighting conditions.

In addition to simulating specific film types, a Grain Effect mode is also available to replicate the look of old film photos with an organic textured appearance, which is especially noticeable when printing.