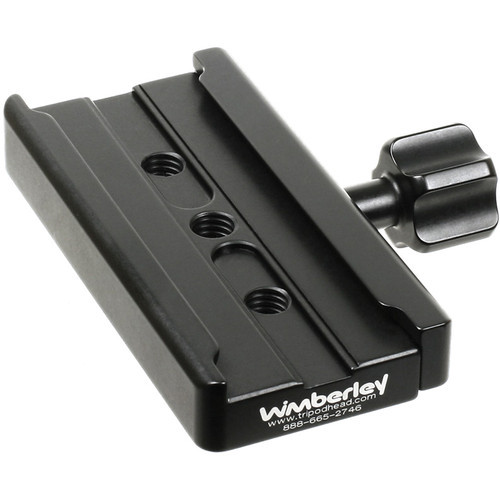 A 104mm-long Arca-style quick release clamp that can be added onto any tripod head with a 3/8"-16 screw, the Wimberley C30 quick release adapter accepts Arca-type quick release plates from Acratech, Arca-Swiss, Foba, Graf, Novoflex, NPC & (of course) Wimberley.  From head-to-toe it is a superior, exceptionally engineered design which will yield many years of reliable, heavy-duty use.  The C30 is long enough to hold any lens/camera combination like a vise grip.

The C-30 is for those who wish to retrofit an old-style Wimberley Head, replace a damaged C-30, or have an application that requires a longer clamp.

Note! The C-30 clamp was made specifically for the old-style Wimberley Head (WH-100 & WH-101). The Wimberley Head Version II (WH-200) has a built-in quick-release clamp, eliminating the need for the C-30. The added length of the C-30 (1.6" longer than the C-10) provides little added functionality for most applications. Wimberley recommends using the lighter, less expensive C-10 clamp.

Superstrong 7075 T6 Aluminum
Wimberley uses 7075 T6 series aluminum for the C30 clamp, which is a standard within the aviation industry and amongst the world's strongest aluminum alloys.  It is heavily alloyed with zinc to be incredibly strong and durable, with superior tensile and yield strength thresholds than 6061 T6 aluminum alloy.

Captive Locking Screw
The clamp's locking knob cannot accidentally fall off from being unscrewed too far.

Built for Tough Use
Wimberley's C30 clamp has a tongue-in-pocket design which protects internal parts from dust and grit.  The spring-loaded moving jaw communicates brilliantly to your hand that the camera's quick release plate and the jaw are in contact.