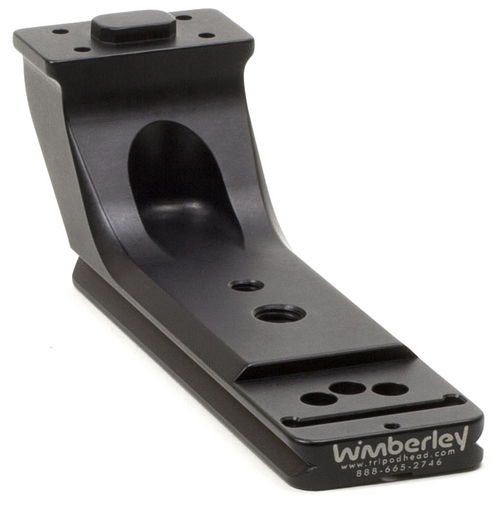 The Wimbereley AP-554 Replacement Foot replaces the stock foot on the rotation collar of the Nikon 500mm f/4 AF-S (I, II & VR) and 200-400mm f/4 AF-S (VR) lenses. The low-profile foot creates a lower center of gravity for your long lens & camera body, making for a better balance when you use the lens with a gimbal head (such as the Wimberley Head or the Sidekick).

Taller than the Wimberley AP-553, the AP-554 provides enough clearance between the lens body and the foot so you can use it as a lens handle. Its longer 5.1" length makes it better balanced with smaller DSLR camera bodies, and it's compatible with all Nikon professional and prosumer bodies – even as the lenses are used with teleconverters (see Compatibility below). In designing this replacement foot, Wimberley used finite material analysis to determine the best balance between stiffness and weight savings. While keeping the foot as light as was appropriate, the manufacturer refused to sacrifice any necessary rigidity.

The bottom of the foot is milled to accept an Arca Swiss-style quick-release clamp, and it also features tapped holes for direct attachment to both 1/4"-20 and 3/8"-16 studs on tripod heads and monopods.